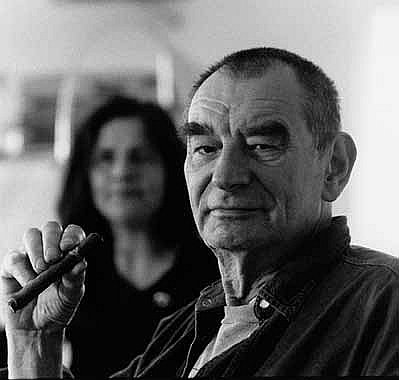 Otto Muehl (16 June 1925 – 26 May 2013) was an Austrian artist, who was known as one of the co-founders as well as a main participant of Viennese Actionism and for founding the Friedrichshof Commune.

In 1943, Muehl had to serve in the German Wehrmacht. There he registered for officer training. He was promoted to lieutenant and in 1944 he took part on infantry battles in the course of the Ardennes Offensive.

After the war, he studied teaching German and History, and Pedagogy of Art at the Wiener Akademie der bildenden Künste.

In 1972 he founded the Friedrichshof Commune, which has been viewed by some as an authoritarian sect, and that existed for several years before falling apart in the 1990s. In 1991, Muehl was convicted of sexual offences with minors and drugs offences and sentenced to 7 years imprisonment. He was released in 1997, after serving six and a half years, and set up a smaller commune in Portugal. After his release, he also published his memoirs from the prison (Aus dem Gefängnis).

In the 1960s, Muehl's aim was 'to overcome easel painting by representing its destruction process'. He made rhizomatic structures with scrap iron ("Gerümpelplastiken"), but soon proceeded to the "Aktion" in the vein of the New York Happenings. In 1962, when he was 37, the first "Aktion" "Die Blutorgel" was performed in Muehl's atelier in the Perinetgasse by Muehl himself, Adolf Frohner, and Hermann Nitsch. The "Fest des psycho-physischen Naturalismus" and "Versumpfung einer Venus" followed in 1963. From 1964 to 1966, many "Malaktionen" were filmed by Kurt Kren and photographed by Ludwig Hoffenreich. In 1966, a new concept of Aktion was developed with Günter Brus: instead of the canvas, the body became the scene of action. In 1968, Muehl, Brus, and Oswald Wiener organised an Aktionsveranstaltung titled Kunst und Revolution in the University of Vienna, which caused a scandal in the press; they were arrested and Brus emigrated to Berlin.

Gradually, Muehl began to distance himself from "Aktion". He regarded the "happening as a bourgeois art form, mere art". The "transition from art to life" resulted in the founding of the Friedrichshof commune as a kind of anti-society. The declared aim was the destruction of bourgeois marriage and private property, free love, and collective education of the children. In 1974 he played a small role as a member of an anarchic/therapy commune in Dusan Makavejev's Sweet Movie. In the eighties, tensions within the commune increased until they culminated in a revolt. When, on top of that, Muehl was arrested and imprisoned in 1991, the commune fell apart. In 1998, Muehl moved to Faro, Portugal to live in a new commune experiment.

Critics such as former community member Andreas Schlothauer point to Muehl's strong authoritarian tendencies. For example, Muehl did not expose himself to the rituals of the Aktionsanalyse. He required members to crush the "body armor" (after Wilhelm Reich) and in some individual cases he experimented with the so-called “Watschenanalyse” ("slapping analysis"). He also created a "structure", in which all community members were placed in a hierarchical pecking order by numbering them. He established a "first wife" and prepared his son to become his successor, which further reveals Muehl's extreme authoritarianism. Paradoxically, in the hierarchical level right below Muehl was a strong matriarchal element of rival women, according to Schlothauer.