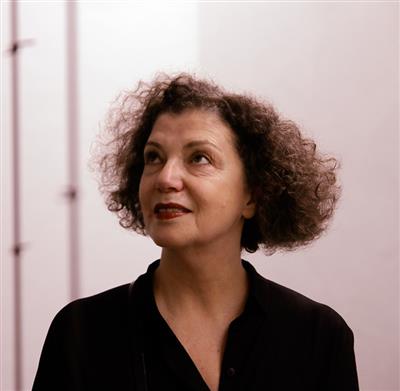 
Mona Hatoum was born in 1952 in Beirut, Lebanon, to Palestinian parents. Although born in Lebanon, Hatoum was ineligible for a Lebanese identity card and does not identify as Lebanese. As she grew up, her family did not support her desire to pursue art. She continued to draw throughout her childhood, though, illustrating her work from poetry and science classes.


Hatoum studied graphic design at Beirut University College in Lebanon for two years and then began working at an advertising agency. Hatoum was displeased with the advertising work she produced. During a visit to London in 1975, the Lebanese Civil War broke out and Hatoum was forced into exile.


She stayed in London, training at both the Byam Shaw School of Art and the Slade School of Fine Art (University College, London) between the years 1975 and 1981. In the years since, "she has traveled extensively and developed a dynamic art practice that explores human struggles related to political conflict, global inequity, and being an outsider."


Hatoum explores a variety of different subject matter via different theoretical frameworks. Her work can be interpreted as a description of the body, as a commentary on politics, and on gender and difference as she explores the dangers and confines of the domestic world. Her work can also be interpreted through the concept of space as her sculpture and installation work depend on the viewer to inhabit the surrounding space to complete the effect. There are always multiple readings to her work. The physical responses that Hatoum desired in order to provoke psychological and emotional responses ensures unique and individual reactions from different viewers.


Hatoum's early work consisted largely of performance pieces that used a direct physical confrontation with an audience to make a political point. She used this technique as a means of making a direct statement using her own body; the performances often referenced her background and the political situation in Palestine. In her work, she addressed the vulnerability of the individual in relation to the violence inherent in institutional power structures. Her primary point of reference was the human body, sometimes using her own body.


Created in 1988, Measures of Distance illustrates Hatoum's early themes of family, displacement, and female sexuality. The video piece itself is fifteen minutes long and consists of intimate, colored photographs of Hatoum's mother showering. Hatoum overlays the photographs with letters that her mother, living in Beirut during the civil war, wrote to Hatoum, living in London. Handwritten in Arabic, the letters make up the video's narration and themes, and speak to the difficulty of sending letters in a time of conflict. Hatoum reads the letters aloud in Arabic and English. The video roots itself in the brief family reunion that occurred in Beirut between Hatoum and her parents in 1981. While primarily about the mother–daughter relationship, in her mother's letters Hatoum's father is mentioned and thus the father–daughter relationship as well as the husband–wife relationship is examined in this video.