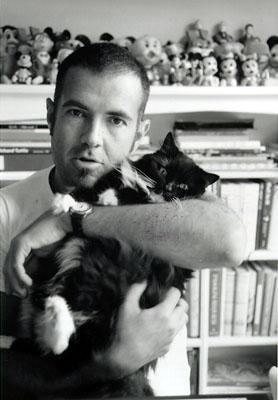 Felix Gonzalez-Torres (November 26, 1957 – January 9, 1996) was a Cuban-born American visual artist. Gonzalez-Torres's openly gay sexual orientation is often seen as influential in his work as an artist. Gonzalez-Torres was known for his minimal installations and sculptures in which he used materials such as strings of lightbulbs, clocks, stacks of paper, or packaged hard candies. In 1987, he joined Group Material, a New York-based group of artists whose intention was to work collaboratively, adhering to principles of cultural activism and community education. Gonzalez-Torres's 1992 piece "Untitled" (Portrait of Marcel Brient) sold for $4.6 million at Phillips de Pury & Company in 2010, a record for the artist at auction.

Gonzalez-Torres was born in Guáimaro, Cuba. In 1957, he and his sister Gloria were sent to Madrid where they stayed in an orphanage until settling in Puerto Rico with relatives the same year. Gonzalez-Torres graduated from Colegio San Jorge in 1976 and began his art studies at the University of Puerto Rico while actively participating in the local art scene. He moved to New York City in 1979 with a study fellowship. The following year he participated in the Whitney Independent Study Program where his development as an artist was profoundly influenced by his introduction to critical theory. He attended the program a second time in 1983, the year he received a BFA in photography from the Pratt Institute of Art. In 1986, Gonzalez-Torres traveled to Europe and studied in Venice. In 1987 he was awarded the degree of Master of Fine Arts by the International Center of Photography and New York University. Subsequently he taught at New York University and briefly at the California Institute of the Arts in Valencia. In 1992 Gonzalez-Torres was granted a DAAD fellowship to work in Berlin, and in 1993 a fellowship from the National Endowment for the Arts.

Gonzalez-Torres died in Miami in 1996 due to AIDS.

Gonzalez-Torres was known for his quiet, minimal installations and sculptures. Using materials such as strings of lightbulbs, clocks, stacks of paper, or packaged hard candies, his work is sometimes considered a reflection of his experience with AIDS. As an openly gay man, he felt it was "much more powerful to assume that the gay and straight audience was the same audience, that being a Cuban-born American is the same as being an American. And being American was something he was extremely proud of." In 1987 he joined Group Material, a New York-based artist collaborative consisting of Doug Ashford, Julie Ault, Karen Ramspacher, and Gonzalez-Torres that adhered to principles of cultural activism and community education. Group Material was invited by the MATRIX Gallery at the Berkeley Art Museum and Pacific Film Archive in 1989 to deal with the subject of AIDS. The result was Group Material's first "AIDS Timeline"

All of Gonzalez-Torres' works, with few exceptions, are entitled "Untitled" in quotation marks, sometimes followed by parenthetical title. (This was an intentional titling scheme by the artist). Of Gonzalez-Torres's nineteen candy pieces, only six, by their parenthetical titles and ideal weights, can be readily interpreted as portraits. Of these two are double portraits of the artist and his lover, Ross Laycock; two are portraits of Ross alone; one is a portrait of Felix's deceased father; and "Untitled" (Portrait of Marcel Brient) (1992) is a portrait of the artist's close friend, French collector Marcel Brient.