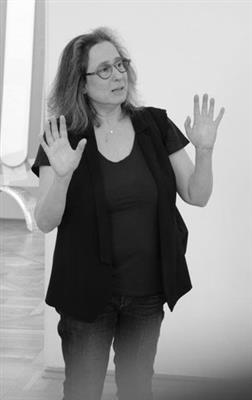 Jessica Stockholder (born 1959) is a sculptor and installation artist who has had exhibitions in Europe and USA. Her works "challenge boundaries, blurring the distinction among painting, sculpture and environment, and even breaching gallery walls by extending beyond windows and doors".

Stockholder studied painting at the University of Victoria in Victoria, B.C., Canada, and received an MFA from Yale University. In 2010 she was awarded an honorary Doctorate of Fine Arts from the Emily Carr College of Art.

From 1999–2011, Stockholder was director and professor of graduate studies in sculpture at Yale University. She is currently the faculty chair of the Department of Visual Arts (DOVA) at the University of Chicago.

Stockholder has said of her own work and approach that "My work developed through the process of making site-specific installations—site-specific sometimes in very specific ways but also just by virtue of being 'art' in a room; there's at least that much going on between the work and its context; after all, paintings don't hang on trees. In all of the work I place something I make in relationship to what's already there. With installations it's the building, the architecture, or you might say it's the place that I work on top of; with the smaller pieces I work on top of or in relation to stuff that I collect. I don't see a dichotomy between formalism and something else. Form and formal relations are important because they mean something; their meaning grows out of our experiences as physical mortal beings of a particular scale in relationship to the world as we find it and make it. I don't buy that formalism is meaningless".

In 2009, The New York Times said of Stockholder: "For more than 25 years, Ms. Stockholder has been celebrated for site-specific sculptures and installations that challenge boundaries, blurring the distinction among painting, sculpture and environment, and even breaching gallery walls by extending beyond windows and doors".

In an interview with Studio International, Stockholder cited many artists that have influenced her work: “Edouard Manet, Paul Cézanne, Henri Matisse, Judy Pfaff, Frank Stella, Gordon Matta-Clark, Kurt Schwitters, Richard Serra, Donald Judd, Emily Carr, Robert Davidson, Susan Point, Rebecca Morris … I also love Cheryl Donegan and Tauba Auerbach’s work.” She has discussed sharing with Matisse an interest in color and what she calls systems: “How things are organized and then how the system breaks down and becomes eccentric or quirky...I think Matisse’s paintings occupy that space too.” Stockholder has also cited Abstract Expressionism as an important influence on her practice. Critics have described Stockholder as part of a genre of artists who incorporate “unpretentious, everyday objects” into large-scale installation and sculpture, alongside contemporaries such as Sarah Sze, Thomas Hirschhorn, and Phyllida Barlow.