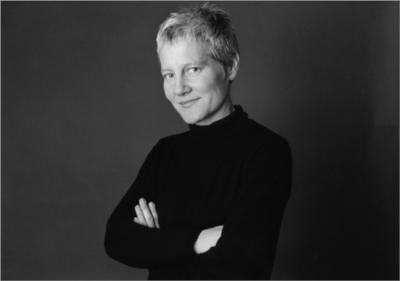 Ann Hamilton (born 1956) is a visual artist who emerged in the early 1980s known for her large-scale multimedia installations. After receiving her BFA in textile design from the University of Kansas in 1979, she lived in Banff, Alberta and Montreal, Quebec, Canada before deciding to pursue an MFA in sculpture at Yale in 1983. From 1985 to 1991, she taught on the faculty of the University of California at Santa Barbara. Since 2001, Hamilton has served on the faculty of the Department of Art at the Ohio State University. She was appointed a Distinguished University Professor in 2011.

Ann Hamilton was born on June 22, 1956 in Lima, Ohio. She grew up in a tight-knit family, and was close to her grandmother. She has memories of sitting on the couch with her, reading, knitting, and doing needlepoint together. Currently she resides in Columbus, Ohio with her husband Michael Mercil, also an artist.

Though Hamilton studied textile design throughout her undergraduate career, she pointedly decided to focus on sculpture instead of weaving as a concentration in graduate school. She claims that, when making that decision, she was “interested in the relationships between things in space. And more important than the things themselves is the way they come into relation.” While in Canada, and while teaching at UC Santa Barbara, Hamilton began connecting her experience with textiles to photography and performance, creating an interdisciplinary artistic dialogue that is evident in her work, which often "weaves" different elements together into one image or includes textiles like pressed shirts or work uniforms.

In addition to her educational background, her personal identity and interests directly inform her artistic creation. She identifies herself as a reader: of space, of objects, of literary criticism, of poetry, and even of dictionaries; thus, the act of reading, words, and books often make their way into her installations, videos, and created objects. Her work also explores themes of humanity, from gender and the body to suffering and power. As a Conceptual artist working with video, sound, and interactive installation, the elements of time, change, and decay also play roles in her work. Hamilton's installations are meant to be experienced with all the senses, often incorporating elements like sound and smell that urge the viewer to connect with and engage the work on a multi-sensory level. Her works also often respond to the spaces and cities in which they are created, using objects that reflect the history and identity of the culture.

One of Hamilton’s first installations, suitably positioned, 1984, set the tone for her later works, encompassing many of her artistic methods: installation, object-making, photography, and performance. For this piece, she constructed a suit made of a men’s thrift-store suit and toothpicks. She then stood, wearing the suit, for the duration of the installation within the studio with viewers walking around the artist without interacting with her. The suit was originally made as a part of a work titled room in search of a position, which, after exhibition, Hamilton believed didn't reach pictorial success and decided to rethink her use of these made objects. However, Hamilton later incorporated the toothpick suit into an installation titled suitably positioned, which finally created a connection between the object, a suit, and the figure, herself within the suit. This installation was directly associated with her body object series.