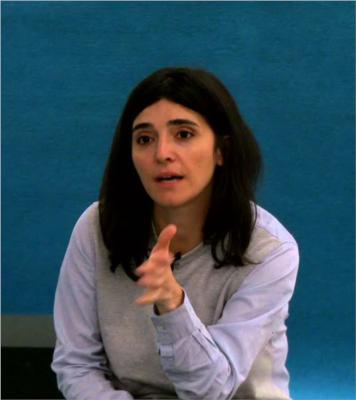 Tea Jorjadze (Georgian: თეა ჯორჯაძე; born 1971 in Tbilisi, Georgia) is a contemporary artist. Jorjadze has lived in Germany since 1994 and since 2009, has been based in Berlin. She is best known for sculpture and installation art, but also works in all other media (Drawing, Painting, Printing, Performance, Video art, Music, et al.).

Tea Jorjadze studied at the Academy of Arts in Tbilisi from 1988–1993. Due to the Georgian Civil War the school was closed in 1993. Jorjadze left the country and became a student at the Gerrit Rietveld Academy in Amsterdam. After one year she left the Netherlands for the Staatliche Kunstakademie Düsseldorf, where Professor Dieter Krieg (until 1997) and Professor Rosemarie Trockel (1998–2001) became her teachers. She graduated as Meisterschüler of Rosemarie Trockel in 2000.

In 1996, she went back to Tbilisi to catch up on her bachelor of arts.

From 1999 on, Jorjadze was a member of the artist group hobbypopMUSEUM, alongside for example Björn Dahlem, Bettina Furler, Christian Jendreiko, Matthias Lahme, Dietmar Lutz, André Niebur, Sophie von Hellerman, and Markus Vater. The group was running a studio in a former postal building in Düsseldorf, which they also used regularly as an exhibition space. The collective released several catalogs as well as records, such as Studio Apartment. hobbypopMUSEUM was invited to shows in San Francisco, by Luc Tuymans, then curator of the NICC in Antwerp, and by the Tate Gallery. In 2003, Djordjadze stopped working with hobbypopMUSEUM (the artist group still exists).

With Rosemarie Trockel she worked on several occasions, including the Venice Biennale in 2003, Kunsthalle St. Gallen in 2006, and the 11th Biennale de Lyon in 2007.

Tea Jorjadze works with materials like plaster, wood, ceramic, glass, along with fabrics, sponge, soap, cardboard or papier-mâché – more openly suggestive of a sphere of feminine domesticity. They are assembled in what looks like an almost intuitive process, where unformed, premature pieces collide with / or rest on precise architectural or domestic structures: hybrid compositions with references to the modernist language.

The viewer is often invited into an ongoing research, in which the transformation and assemblage of materials is sedimented in the objects. Der Knacks (i.e. the crack) (2007), a plaster sculpture broken and then reassembled in an in-stable formation is emblematic of the artist’s method of production. The title of the work refers to Francis Scott Fitzgerald’s The Crack Up, in which break or failure is indicated as the center part of the creative process.