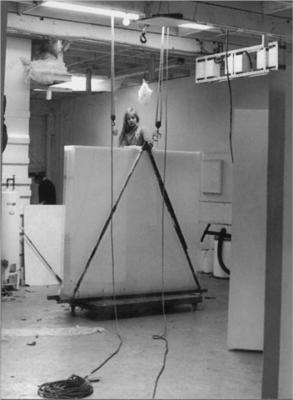 Mary Corse (born 1945) is an American artist who lives and works in Los Angeles, California. She is a member of the male-dominated Light and Space art movement of the 1960s, although her role has only been fully recognized in recent years. She is best known for her experimentation with radiant surfaces in minimalist painting, incorporating materials that reflect light such as glass microspheres. Corse received her B.F.A. from the University of California, Santa Barbara in 1963 and her M.F.A. from the Chouinard Art Institute (now CalArts) in 1968.

In the mid-1960s, Mary Corse developed an interest in white monochrome paintings. These paintings use the controlled, geometric style of minimalism. She soon began to use shaped canvases. Corse became interested in three-dimensional works. She assembled columns out of plywood and joint compound, which she painted with white acrylic paint. During the same period, Corse started a series of works that encased fluorescent bulbs in Plexiglas boxes. In 1968, she began to embed glass microspheres, tiny reflective beads commonly used to brighten highway signs, in her paintings by mixing them with white acrylic paint. These "White Light Paintings" are "highly responsive to their environments and reveal internal complexities when lighting conditions fluctuate or viewers change their positions." Because of their capacity for transformation, The White Light paintings reflect Corse's interest in the personal and subjective nature of perception.

Corse was awarded the Cartier Foundation award (1993), the Theodoran Award by the Solomon R. Guggenheim Museum (1971), and the New Talent Award by the Los Angeles County Museum of Art (1967). In 1975, she received a National Endowment for the Arts Fellowship.