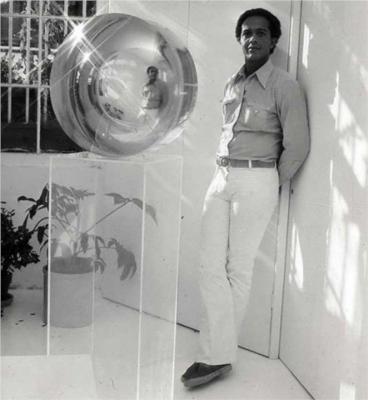 Frederick Eversley in his studio, 1971. Photo by Frank J. Thomas

Fred Eversley (born 1941, in Brooklyn, New York) is an American sculptor who lives and works in the Venice Beach area of Los Angeles, and in Soho, New York. He creates sculptures from cast resin and other materials, "a medium that makes possible many different effects, ranging from opacity to complete transparency. Eversley casts resin, a technically demanding material, into large cylinders; then, through cutting and polishing alters their form." Eversley's first solo exhibition at the Whitney Museum was in 1970; later, in 1977, he became the first artist-in-residence at the Smithsonian Institution's Air and Space Museum.

Eversley was trained as an engineer; from 1963 until 1967 "he was a senior project engineer, instrumentation systems, at Wyle Laboratories, where he was responsible for supervising the design and construction of high-intensity acoustic and vibration test laboratories at NASA facilities."

He attended Carnegie Institute of Technology in Pittsburgh. He moved to Venice, California, in 1964 where he became friends with several Los Angeles artists, and retired from engineering in 1967 to become an artist full-time. "Using plastic resin, he developed a formal sculptural language that reflected the West Coast style that came to be known as 'finish fetish,' a seemingly more decorative approach to minimalism that appeared to take its cues from the synthetic materials and mechanized surfaces of hot rods, surfboards, and the aerospace industry."

According to the Smithsonian American Art Museum, "His cast plastic sculptures employ polished surfaces and translucent colors that interact with the natural light. In this way, the artist makes what he calls 'kinetic art' that does not need mechanical movement or artificial effects. Eversley is inspired by energy in all its forms, and his work explores ways to capture and make use of the earth's natural resources."

"The highly translucent, reflective surfaces of these sculptures produced an optical experience at once elegant and mystical. Eversley continued using basic geometric forms to experiment with light refraction, and in the 1970s incorporated parabolic curves into his work that evoke mirrors or large lenses." - : http://blogs.getty.edu/pacificstandardtime/explore-the-era/people/frederick-eversley/#sthash.w65JpLIn.dpuf