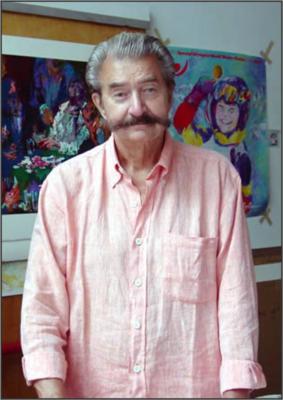 Neiman was born in 1921 in Saint Paul, Minnesota, the son of Lydia Sophia (née Serline), of Braham, Minnesota, and Charles Julius Runquist, who were married in 1918, and living at Grasston, Minnesota (Kanabec County). He was of Turkish and Swedish descent ("as near as I can figure out," as he has said). His father deserted his family, and when his mother married his stepfather, John L. Niman (Neiman) in 1926, LeRoy changed to the new surname as well. His mother divorced Neiman about 1935, and married for the third time in about 1940, to Ernst G. Hoelscher, of St. Paul. She died in St. Paul on November 14, 1985 at age 87. LeRoy was raised in the Macalester-Groveland and Frogtown neighborhoods of St. Paul. The home he lived in the longest, from about 1940 to about 1955, still stands at 569 Van Buren Avenue.

Neiman served in the U.S. Army during World War II. He worked as a cook until the end of the war, when his art skills were recognized and put to use painting sets for Red Cross shows. Following his return in 1946, Neiman studied briefly at the St. Paul School of Art, then at the School of The Art Institute of Chicago on the G.I. Bill. After graduating, Neiman served on the Art Institute faculty for ten years. During the time Neiman was teaching, he was exhibiting art in competitions and winning prizes. In 1954, Neiman began his association with Playboy magazine. Neiman had met Hugh Hefner while doing freelance fashion illustration for the Carson Pirie Scott department store chain, where Hefner was a writer. Hefner and Playboy art director Art Paul commissioned an illustration for the magazine's fifth edition. Hefner told Sports Illustrated, "I don't remember the moment. Our eyes did not meet across a crowded room." One day, after Hefner had started his magazine, he ran into Neiman on a street and asked him to become a contributor to Playboy. Among Neiman's contribution over the next 50 years, he created the Femlin character for the Party Jokes page, and did a feature for 15 years titled "Man at His Leisure," where Neiman would paint illustrations of his travels to exotic locations.

Beginning in 1960, he traveled the world observing and painting leisure life, social activities and athletic competitions including the Olympics, the Super Bowl, the World Series, the Kentucky Derby, championship boxing, PGA and The Masters golf tournament, The Ryder Cup, the World Equestrian Games, Wimbledon and other Grand Slam competitions, as well as night life, entertainment, jazz and the world of casino gambling.

In 1970 Neiman did the illustration for The 5th Dimension's album Portrait.

In 1998 he did all the illustrations for a special "Sports" issue of The Nation magazine, for which he received the magazine's standard fee of $150.