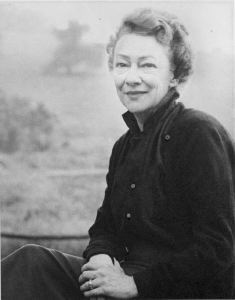 Katherine Linn Sage (June 25, 1898 – January 8, 1963), usually known as Kay Sage, was an American Surrealist artist and poet. She was active between 1936 and 1963. A member of the Golden Age and Post-War periods of surrealism, she is mostly recognized for her artistic works, which typically contain themes of an architectural nature.

Sage was born in Albany, New York, into a wealthy family that had made its money in the timber industry. Her father, Henry M. Sage, was a state assemblyman the year after her birth and later was a five-term state senator. Her mother was Anne Wheeler (Ward) Sage. Sage had an elder sister, Anne Erskine Sage.

Anne Wheeler Ward Sage left her husband and older daughter soon after Kay's birth to live and travel in Europe with Kay as her companion. She and Henry Sage divorced in 1908, but Henry Sage continued to support his ex-wife and younger daughter, and Katherine visited him and his new wife in Albany from time to time and wrote him frequent letters.

Katherine and her mother established a home in Rapallo, Italy, but visited many other places as well, including Paris. Katherine became fluent in French and Italian, speaking colloquial versions of these languages that she learned from the servants who helped to raise her. She attended a number of schools, including the Foxcroft School in Virginia, where she became a lifelong friend of the heiress Flora Payne Whitney.

Young Katherine both drew and wrote as hobbies, but her first formal training in painting was at the Corcoran Art School in Washington, D.C., in 1919–1920. After she and her mother went back to Italy in 1920, she studied art in Rome for several years, learning conventional techniques and styles. She particularly enjoyed painting outdoors in the Roman Campagna with teacher Oronato Carlandi and fellow students. Much later, Sage stated that “these were the happiest days of my life”, and she told friend and gallery owner Julien Levy in 1961 that her campagna experience shaped her “perspective idea of distance and going away.” Nonetheless, in later years Sage usually claimed that she was self-taught, perhaps because, as one of her biographers, Judith Suther, states, most of what she had learned in Rome bore so little relationship to the kind of painting she eventually did that “she felt as if she had studied with no one.”

Sage met a young Italian nobleman, Prince Ranieri di San Faustino, in Rome around 1923 and fell in love with him, believing at first, as she wrote to a friend in 1924, that he was “me in another form.” They married on March 30, 1925. For ten years the couple lived the idle life of upper-class Italians, which Sage later described as “a stagnant swamp.” She looked back on that time as years that she simply “threw away to the crows. No reason, no purpose, nothing.” Her husband was content with their lifestyle, but Sage was not: as she wrote in her autobiography, China Eggs, “Some sort of inner sense in me was reserving my potentialities for something better and more constructive.”