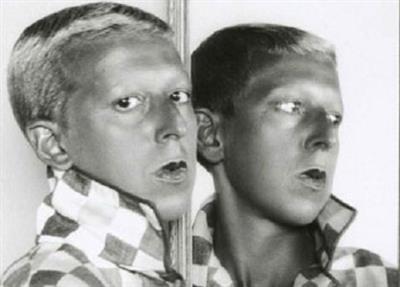 
Schwob adopted the gender-ambiguous name Claude Cahun in 1917 and is best known for self-portraits, in which she assumed a variety of personae.


Cahun's work was both political and personal, and often undermined traditional concepts of static gender roles. In her autobiography, Disavowals, they explained, "Masculine? Feminine? It depends on the situation. Neuter is the only gender that always suits me."


During WWII, Cahun was also active as a resistance worker and propagandist.


Born in Nantes in 1894, Cahun was born into a provincial but prominent intellectual Jewish family. She was the niece of avant-garde writer Marcel Schwob and the great-niece of Orientalist David Léon Cahun. When Cahun was four years old, her mother, Mary-Antoinette Courbebaisse, began suffering from mental illness, which ultimately led to her permanent internment at a psychiatric facility. In her mother's absence, Cahun was brought up by her grandmother, Mathilde Cahun.


Cahun attended a private school (Parsons Mead School) in Surrey after experiences with anti-Semitism at her high school in Nantes. She attended the University of Paris, Sorbonne.


She began making photographic self-portraits as early as 1912 (aged 18), and continued taking images of herself through the 1930s.


Around 1919, she changed her name to Claude Cahun, after having previously used the names Claude Courlis (after the curlew) and Daniel Douglas (after Lord Alfred Douglas). During the early 1920s, she settled in Paris with lifelong partner and step-sibling Suzanne Malherbe, who adopted the pseudonym Marcel Moore. For the rest of their lives together, Cahun and Moore collaborated on various written works, sculptures, photomontages and collages. The two published articles and novels, notably in the periodical Mercure de France, and befriended Henri Michaux, Pierre Morhange, and Robert Desnos.


Around 1922 Claude and Moore began holding artists' salons at their home. Among the regulars who would attend were artists Henri Michaux and André Breton and literary entrepreneurs Sylvia Beach and Adrienne Monnier.


Cahun's works encompassed writing, photography, and theatre. She is most remembered for her highly staged self-portraits and tableaux that incorporated the visual aesthetics of Surrealism. During the 1920s Cahun produced an astonishing number of self-portraits in various guises such as aviator, dandy, doll, body builder, vamp and vampire, angel, and Japanese puppet.


Many of Cahun's portraits feature the artist looking directly at the viewer, head shaved, often revealing only head and shoulders (eliminating body from the view), and a blurring of gender indicators and behaviors which serve to undermine the patriarchal gaze. Scholar Miranda Welby-Everard has written about the importance of theatre, performance, and costume that underlies Cahun's work, suggesting how this may have informed the artist's varying gender presentations.


Cahun's published writings include "Heroines," (1925) a series of monologues based upon female fairy tale characters intertwined with witty comparisons to the contemporary image of women; Aveux non avenus, (Carrefour, 1930) a book of essays and recorded dreams illustrated with photomontages; and several essays in magazines and journals.


In 1932 Cahun joined the Association des Écrivains et Artistes Révolutionnaires, where she met André Breton and René Crevel. Following this, she started associating with the surrealist group, and later participated in a number of surrealist exhibitions, including the London International Surrealist Exhibition (New Burlington Gallery) and Exposition surréaliste d'Objets (Charles Ratton Gallery, Paris), both in 1936. Cahun's photograph from the London exhibition of Sheila Legge standing in the middle of Trafalgar Square, her head obscured by a flower arrangement and pigeons perching on her outstretched arms, appeared in numerous newspapers and was later reproduced in a number of books. In 1934, Cahun published a short polemic essay, Les Paris sont Ouverts, and in 1935 took part in the founding of the left-wing anti-fascist alliance Contre Attaque, alongside André Breton and Georges Bataille. Breton called Cahun "one of the most curious spirits of our time."