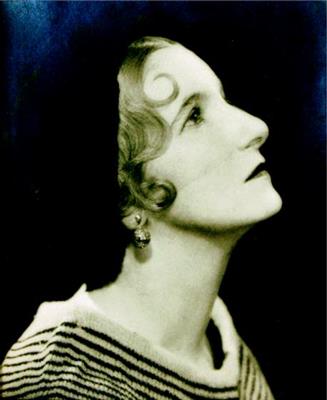 Valentine Hugo (1887–1968) was a French artist and writer. She was born Valentine Marie Augustine Gross, only daughter to Auguste Gross and Zélie Démelin, in Boulogne-sur-Mer. She is best known for her work with the Russian ballet and with the French Surrealists. Hugo died in Paris.


A lover of the theater and music, Hugo's father raised her to share his interests until his death in 1903, which was undetermined as suicide or an accident. After her husband's death, Zélie raised her daughter alone.


Valentine Hugo received schooling in Boulogne-sur-Mer, where she received multiple awards for accomplishments in drawing, until 1907, at which time she entered the L'École des Beaux-Arts in Paris. There she worked in the studio at the Académie Humbert and exhibited in the Salon of French artists in 1909, and again in 1911. In 1908, Valentine Hugo met the artist Edmond Aman-Jean, who painted her portrait in 1909 and encouraged Hugo's artistic pursuits.


Hugo's work with the Ballets Russes established her connection with Jean Cocteau, who would introduce her to several important figures in her life, including her future husband French artist Jean Hugo (1894–1984), great-grandson of Victor Hugo. She would collaborate with him on ballet designs including Les mariés de la tour Eiffel (1921), and in 1926 she executed 24 wood engravings after maquettes by Jean Hugo for Jean Cocteau's production of Roméo et Juliette. Her involvement with the ballets provided Hugo many opportunities to progress her artwork. She often drew sketches of the ballets' choreography, and had a particular fascination with dancer and choreographer Vaslav Nijinsky. In 1913 she exhibited her paintings at the Théâtre des Champs-Elysées during the premiere of The Rite of Spring.


Hugo and Cocteau collaborated to create the ballet Parade, which premiered on 18 May 1917. Hugo worked on several other of Satie's ballets, including Le Piège de Méduse, Socrate, and Mercure.


Hugo hosted salons with many artists, writers, and musicians in Paris, including avant-garde leaders such as Pablo Picasso, André Breton, and Paul Éluard. She would often sketch her visitors, foreshadowing her portraiture work of the Surrealist leaders later on.


Hugo met Breton in 1917, before the start of Surrealism, at one of Cocteau's readings. Her friendships with Breton and Eluard would keep her connected to the Surrealists as the movement developed, and help her to form connections with other members, such as Salvador Dalí and Max Ernst. The three often traveled together, along with other members of the movement, in 1931 and 1932. As the only member of the group who owned a vehicle, Hugo would drive her companions to their destinations.


Valentine and Jean began living apart in 1926, and eventually divorced in 1932. Her separation from her husband allowed Hugo greater freedom to be involved with the Surrealist group. She moved into the same building as Eluard and Breton in May 1932.


Hugo joined the Bureau of Surrealist Research and created the Objet à fonctionnement symbolique (1931), which was shown during the Exposition surréalistic in 1933. She took part in other exhibitions throughout her time with the group, including an exhibit at the Museum of Modern Art in 1936.