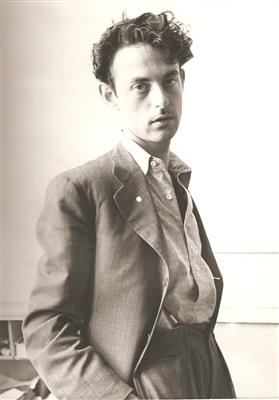 
Endre Rozsda was born in Mohács, a small city along the Danube in Hungary. His childhood memories marked his entire artistic work. The creative method he developed helped him to conjure a unique surrealistic world based on his memories: "Out of memory and light I weave a dense fabric. I look steadily at it until it comes to life and stares back at me, until it rises up in front of me. It’s time that I want to get hold of, arrange and evaluate. Time is that bright, multi-colored oblivion where joys and sufferings turn into precious beads. Around time’s beads I twist the ivy of my own memories. I don’t want to assess or explain anything. I want to understand. I lay my head against time and listen to what it tells me."


Rejecting his family's plans for a career, he decided to become a painter at an early age. He acquired the basic skills of the trade in the school of Vilmos Aba-Novák. His first solo exhibition, held in ‘Tamás’ Gallery at age 23 (1936), was a great success. Critics praised his work and the Museum of Fine Arts, Budapest bought one of his paintings. "Rozsda is a stunning major talent. Few have ever painted old women and beggars the way he does. (…) In some of his beautiful images a veil of fog and light is woven, turning reality into a melodic chimera", a critic writing for Est praised the young painter.


His early artistic period, closely tied to Hungarian post-impressionism, came to an end after attending a Béla Bartók concert. His early successes notwithstanding, after listening to Bartók he came to understand that "I am not my own contemporary". With sculptor Lajos Barta, he moved to Paris (1938), where he continued his studies at the École de Louvre. In the French capital he befriended Árpád Szenes, Vieira da Silva and Françoise Gilot (Picasso's later wife) who became his student for a while. He also became acquainted with Max Ernst and Alberto Giacometti. His thinking underwent fundamental change and came closer to Surrealism. Following the German occupation, he was forced to return to Budapest (1943) where his unique surrealistic style fully matured (Sacred and Profane Love, 1947; Musée des Beaux-Arts de Dijon).


After the war, he played an active role in the establishment of the European School and showed his work regularly in group shows. According to art historian, Krisztina Passuth, Endre Rozsda was one of the most prominent figures of the European School. In 1948 the group disbanded because the new regime did not tolerate abstract surrealist art. In the next few years Rozsda worked on book illustrations, painted in secret and, obviously, could not show his work in public.


Following the suppression of the Hungarian Revolution of 1956 he permanently returned to France. He came into contact with Raymond Quenaeu and André Breton, who wrote an introduction for his exhibition at the ‘Furstenberg’ Gallery (1957). He participated in the International Exhibition of Surrealism in Milan (1961). A few years later he won the Copley-Prize (1964) from a jury composed of Hans Arp, Roberto Matta, Max Ernst, Man Ray, Roland Penrose, Sir Herbert Read and Marcel Duchamp.