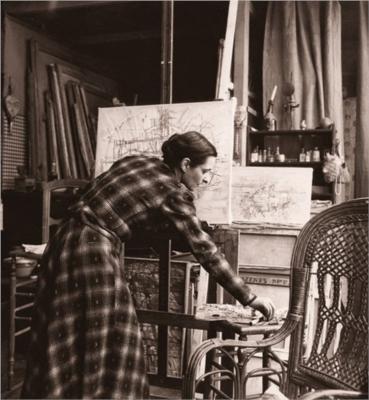 Vieira da Silva was born in Lisbon, Portugal. At the age of eleven she had begun seriously studying drawing and painting at that city's Academia de Belas-Artes. In her teen years she studied painting with Fernand Léger, sculpture with Antoine Bourdelle, and engraving with Stanley William Hayter, all masters in their respective fields. Vieira da Silva also worked with Fauve artist Othon Friesz.

In 1928 Vieira da Silva left Lisbon to study sculpture in Paris, but decided in 1929 to focus on painting. By 1930 she was exhibiting her paintings in Paris; that same year she married the Hungarian painter Árpád Szenes. After a brief sojourn back in Lisbon and a period spent in Brazil during World War II (1940–1947), Vieira da Silva lived and worked in Paris the rest of her life. She adopted French citizenship in 1956. Vieira da Silva received the French government's Grand Prix National des Arts in 1966, the first woman so honored. She was named a Chevalier of the Legion of Honor in 1979. She died in Paris, France on 6 March 1992.

Her name sometimes appears written as "Elena", but the correct version, in Portuguese, is "Helena".

In the 1930s Vieira da Silva began producing her characteristic works which were heavily impastoed, and overlaid with a complex arrangement of small rectangles. In 1943, Vieira da Silva exhibited in Peggy Guggenheim's show Exhibition by 31 Women at the Art of This Century gallery in New York. By the late 1950s she was internationally known for her dense and complex compositions, influenced by the art of Paul Cézanne and the fragmented forms, spatial ambiguities, and restricted palette of cubism and abstract art. She is considered to be one of the most important Post-War abstract artists although she is not a “pure” abstract painter. Her work is related to French Tachisme, American Abstract expressionism, and Surrealism—as were many of her contemporaries who were painting in Post-War Paris during the mid to late 1940s and early 1950s. Her paintings often resemble mazes, cities seen in profile or from high above or even library shelves in what seems to be an allegory to a never-ending search for Knowledge or the Absolute. Vieira da Silva has also created many prints, designs, for tapestries, ceramic decorations, and stained glass windows.

She exhibited her work widely, winning a prize for painting at the São Paulo Art Biennial in São Paulo in 1961. In 1966-76 she made a stained-glass window for the St. James church in Reims together with Josef Sima. In 1974 she made the painting A Library Burning which uses many of the elements from that window. She decorated in 1988 the new Cidade Universitária subway station of Lisbon with azulejo panels.

In November 1994, the Árpád Szenes-Vieira da Silva Foundation was inaugurated in Lisbon, a museum that displays a large collection of paintings by both artists.