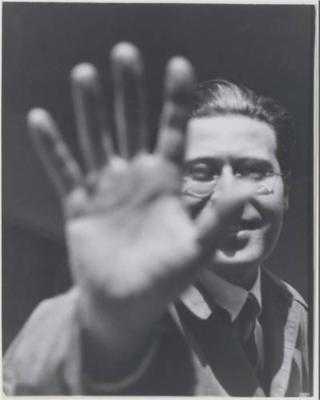 László Moholy-Nagy (/məˌhoʊliˈnɒdʒ/; Hungarian: [ˈlaːsloː ˈmohojnɒɟ]; born László Weisz; July 20, 1895 – November 24, 1946) was a Hungarian painter and photographer as well as a professor in the Bauhaus school. He was highly influenced by constructivism and a strong advocate of the integration of technology and industry into the arts.

Moholy-Nagy was born László Weisz in Bácsborsód to a Jewish family. His cousin was the conductor Sir Georg Solti. He attended Gymnasium in the city of Szeged. He changed his German-Jewish surname to the Magyar surname of his mother's Christian lawyer friend Nagy, who supported the family and helped raise László and his brothers when their Jewish father, Lipót Weisz left the family. Later, he added “Moholy” to his surname, after the name of the town of Mohol (today in Serbia) in which he grew up. One part of his boyhood was spent in the family home near Mohol.

In 1918, he formally converted to the Hungarian Reformed Church; his godfather was his Roman Catholic university friend, the art critic Ivan Hevesy. Immediately before and during World War I he studied law in Budapest and served in the war, where he sustained a serious injury. In Budapest, on leave and during convalescence, Moholy-Nagy became involved first with the journal Jelenkor (“The Present Age”), edited by Hevesy, and then with the “Activist” circle around Lajos Kassák’s journal Ma (“Today”). After his discharge from the Austro-Hungarian army in October 1918, he attended the private art school of the Hungarian Fauve artist Róbert Berény. He was a supporter of the Hungarian Soviet Republic, declared early in 1919, though he assumed no official role in it. After the defeat of the Communist regime in August, he withdrew to Szeged. An exhibition of his work was held there, before he left for Vienna around November 1919. He left for Berlin early in 1920.

In 1923, Moholy-Nagy took over Johannes Itten's role co-teaching the Bauhaus preliminary course with Josef Albers and also replaced Itten as Head of the Metal Workshop. This effectively marked the end of the school’s expressionistic leanings and moved it closer towards its original aims as a school of design and industrial integration. The Bauhaus became known for the versatility of its artists, and Moholy-Nagy was no exception. Throughout his career, he became proficient and innovative in the fields of photography, typography, sculpture, painting, printmaking, and industrial design. One of his main focuses was photography. He coined the term Neues Sehen (New Vision) for his belief that photography could create a whole new way of seeing the outside world that the human eye could not. His theory of art and teaching is summed up in his book The New Vision, from Material to Architecture. He experimented with the photographic process of exposing light sensitive paper with objects laid on it, called photogram. His teaching practice covered a diverse range of media, including painting, sculpture, photography, photomontage and metal.

He left the Bauhaus in 1928 and established his own design studio in Berlin. Marianne Brandt took over his role as Head of the Metal Workshop.