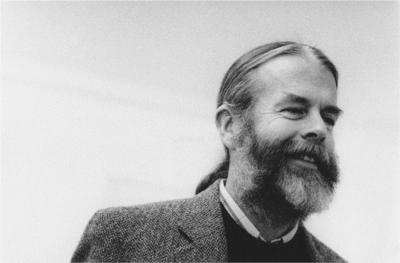 Fred Sandback (August 29, 1943 – June 23, 2003) was a minimalist conceptual-based sculptor known for his yarn sculptures, drawings, and prints. His estate is represented by David Zwirner, New York.

Frederick Lane Sandback was born in Bronxville, New York where, as a young man, he made banjos and dulcimers. He majored in philosophy at Yale University (BA, 1966) before studying sculpture at Yale School of Art (MFA, 1969) where he studied with, among others, visiting instructors Donald Judd and Robert Morris.

Sandback is primarily known for his Minimalist works made from lengths of colored yarn. The artist's early interest in stringed musical instruments led him to make dulcimers and banjos as a teenager. In 1967, he produced the sculpture that would establish the terms of his mature work. Using string and wire, he outlined the shape of a 20-foot-long 2-by-4 board lying on the floor. Though he employed metal wire and elastic cord early in his career, the artist soon dispensed with mass and weight by using acrylic yarn. His yarn, elastic cord, and wire sculptures define edges of virtual shapes that ask the viewer's brain to perceive the rest of the form. In that way his work can be considered visionary or imaginative, as well as minimal and literal. Indeed, Sandback was fond of installing "corner" pieces whose shadows assist with this form completion process. In describing his work he stated, "It's a consequence of wanting the volume of sculpture without the opaque mass that I have the lines." and "I did have a strong gut feeling from the beginning though, and that was wanting to be able to make sculpture that didn't have an inside." Sandback himself referred to his sculptures operating in pedestrian space, acknowledging both the viewer’s movement through a space and as something to be engaged actively.

Sandback's first one-person exhibitions were at the Galerie Konrad Fischer, Düsseldorf, and the Galerie Heiner Friedrich, Munich, both in 1968, while the artist was still a graduate student. Following this debut, Sandback exhibited widely his minimalist sculptures and prints in the United States, Europe and elsewhere. His artwork was included in the 1968 Annual Exhibition at the Whitney Museum of American Art, the Biennale of Sydney in 1976, and the Seventy-third American Exhibition at the Art Institute of Chicago in 1979. In 2003, several large Sandback sculptures were permanently installed at Dia's museum in Beacon, New York. That same year, Sandback created Mikado (Sculptural Study for the Pinakothek der Moderne) as site-specific at the then newly opened Pinakothek der Moderne.

Sandback's work was the subject of an extensive survey exhibition organized in 2005 by the Kunstmuseum Liechtenstein, Vaduz (which traveled to the Fruitmarket Gallery, Edinburgh and the Neue Galerie am Joanneum, Graz, in 2006). His work is represented in many public collections including the Centre Georges Pompidou, Paris, The Museum of Modern Art, New York, Museum für Moderne Kunst, Frankfurt am Main, National Gallery of Art, Washington D.C., Solomon R. Guggenheim Museum, New York, Pinakothek der Moderne, Munich, the Art Institute of Chicago, and the Albright-Knox Art Gallery, Buffalo.