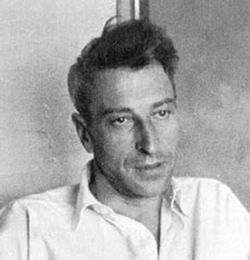 Nicolas de Staël (French nationality, of Russian origin) was a painter known for his use of a thick impasto and his highly abstract landscape painting. He also worked with collage, illustration and textiles.

Nicolas de Staël (French: [ni.kɔ.la də stal]; January 5, 1914 – March 16, 1955) was a French painter of Russian origin known for his use of a thick impasto and his highly abstract landscape painting. He also worked with collage, illustration and textiles.

Nicolas de Staël was born Николай Владимирович Шталь фон Гольштейн (Nikolai Vladimirovich Stael von Holstein) in Saint Petersburg, into the family of a Russian Lieutenant General, Baron Vladimir Stael von Holstein, (a member of the Staël von Holstein family, and the last Commandant of the Peter and Paul Fortress) and his second wife, Lubov Vladimirovna Berednikova (his first wife was Olga Sakhanskaya). De Staël's family was forced to emigrate to Poland in 1919 because of the Russian Revolution; both his father and stepmother died in Poland and the orphaned Nicolas de Staël was sent with his older sister Marina to Brussels to live with a Russian family (1922).

He eventually studied art at the Brussels Académie Royale des Beaux-Arts (1932). In the 1930s, he travelled throughout Europe, lived in Paris (1934) and in Morocco (1936) (where he first met his companion Jeannine Guillou, also a painter and who would appear in some of his paintings from 1941–1942) and Algeria. In 1936 he had his first exhibition of Byzantine style icons and watercolors at the Galerie Dietrich et Cie, Brussels. He joined the French Foreign Legion in 1939 and was demobilized in 1941. Sometime in 1940 he met one of his future dealers Jeanne Bucher.

In 1941, he moved to Nice where he met Jean Arp, Sonia Delaunay and Robert Delaunay, and these artists would inspire his first abstract paintings, or "Compositions". In 1942, Jeannine and Nicolas de Staël's daughter Anne was born. The growing family also included Jeannine's nine-year-old son Antoine. In 1943 (during the Nazi occupation), de Staël returned to Paris with Jeannine, but the war years were extremely difficult. During the war his paintings were included in several group exhibitions and in 1944 he had his first one-man exhibition at the Galerie l'Esquisse. In April 1945, he had a one-man exhibition at the Galerie Jeanne Bucher and in May 1945 his paintings were included in the first Salon de Mai. De Staël's work was also included in the Salon d'Automne that year. In Paris in 1944, he met and befriended Georges Braque, and by 1945 his exhibitions brought him critical fame. However times were difficult, and successes came too late, since Jeannine died in February 1946 from illness brought on by malnutrition.

De Staël met Françoise Chapouton in the spring of 1946, and they married in May. In October 1946 thanks to his friendship with artist André Lanskoy (whom he met in 1944) de Staël made a contract with Louis Carré who agreed to buy all the paintings that he produced. By January 1947 the de Staël family moved into larger quarters thanks to increased recognition and increased sales. In 1947 he befriended his neighbor American private art dealer Theodore Schempp. De Staël's new studio in Paris was very close to Georges Braque's and the two painters became very close friends. In April 1947 his second daughter Laurence was born. In April 1948 his son Jerome was born, also that same year in Paris he began a long friendship with German artist Johnny Friedlaender. His paintings began to attract attention worldwide. In 1950 he had a one-man exhibition at the Galerie Jacques Dubourg in Paris and Schempp introduced de Staël's paintings to New York, with a private exhibition at his Upper East Side apartment. He sold several paintings to important collectors including Duncan Phillips of the Phillips Collection. He had considerable success in the United States, and England in the early 1950s. In 1950 Leo Castelli organized a group exhibition at the Sidney Janis Gallery in New York City that included him. In 1952, He had one-man exhibitions in London, Montevideo, and in Paris. In March 1953, he had his first official one-man exhibition at M. Knoedler & Co. in New York City. The show was both a commercial and critical success. In 1953 he had an exhibition at the Phillips Gallery in Washington DC, (known today as The Phillips Collection in Washington DC) and they acquired two more of his canvasses. Visiting the United States in 1953 de Staël and Francoise visited MoMA, the Barnes Foundation in Merion, Pennsylvania and various other important institutions.