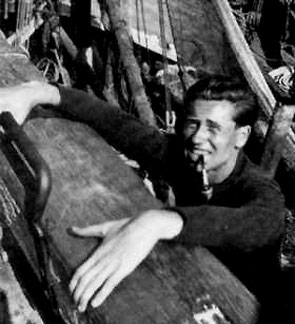 Manessier was born among fishers and masons in the Picardy province of Northern France. There was a family precedent for creative work, as the grandfather was a decorative stonemason while his father and uncle had studied at Ecole des Beaux Arts at Abbeville. The "father gave the young man permission to go to Paris on condition that he studied architecture, which was a safer occupation than that of painter. It was not until his father, then a wholesale wine merchant in Amiens, suddenly died that he was able to change over" to his preferred art studies. He had enrolled in architecture in 1929, switched to art with Roger Bissiere at Academie Ranson in 1935 just prior to the father's death in 1936.

In 1937 at the Paris International Exposition, the French government appointed Sonia Delaunay and Robert Delaunay to represent avant-garde art in Paris transportation centers such as Air Palace and Railways Palace. The couple was given the task to employ and reside with 50 unemployed artists for March and April to create a substantial project of 19,000 square feet (1,800 m) of artwork. Among the artists were Bissiere, Jean Bertholle, and Manessier, who worked on four murals. The following year he married painter Therese Simonnet. In 1939 Manessier was called into military conscription, as a technical draftsman. In 1940, expecting the birth of his son, he found work as a farmhand to support the growing family but by 1941 he returned to Paris to exhibit in the Gallery Braun show "20 Young Painters" that ushered into France the non-figurative movement. Despite the abstract style centered in what the occupying Germans deemed "degenerate" modes, and despite Manessier's teaching at the anti-authority and anti-indoctrination organization Young France, the painter was not censored or molested The Young France organization prepared youth for work at the end of the German Occupation, with a teaching staff that also included Jean Bazaine, Jean Vilar, Jean Desailly, Andre Clement.

Manessier left teaching in 1943 for painting full-time. During this year he made a 3-day visit to the Trappist monastery in Orne. Demoralized by the Occupation and war, at the monastery he was deeply moved by the ancient garb and art, chants and worship, rhythms of work and silence by the monks. "I felt profoundly the cosmic link between sacred chanting and the world of nature all around. These men who sang were perhaps a little out of touch with the world but there was truth in their relationship with nature" he recalled. "If we had the evangelical purity of the Primitives, if we could look at nature with all innocence of love, then perhaps we could depict the sacred as they did. But we are men of this century: broken, exploded." Thus began the fertile period of abstract painting: "mosaic-like patterns, luminous colors often supported by a heavy black grid."