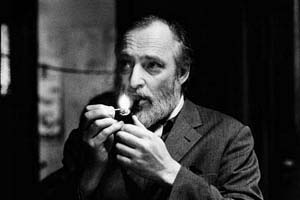 Asger Jorn was a Danish painter, sculptor, ceramic artist, and author. He was a founding member of the avant-garde movement COBRA and the Situationist International. He was born in Vejrum, in the northwest corner of Jutland, Denmark and baptized Asger Oluf Jørgensen.

The largest collection of Asger Jorn's works—including his major work Stalingrad—can be seen in the Museum Jorn, Silkeborg, Denmark.

Asger Oluf Jorn (3 March 1914 – 1 May 1973) was a Danish painter, sculptor, ceramic artist, and author. He was a founding member of the avant-garde movement COBRA and the Situationist International. He was born in Vejrum, in the northwest corner of Jutland, Denmark, and baptized Asger Oluf Jørgensen.

The largest collection of Asger Jorn's works—including his major work Stalingrad—can be seen in the Museum Jorn, Silkeborg, Denmark.

He was the second oldest of six children, an elder brother to Jørgen Nash. Both of his parents were teachers. His father, Lars Peter Jørgensen, was a fundamentalist Christian who died in a car crash when Asger was 12 years old. His mother, Maren, née Nielsen, was more liberal but nevertheless a deeply committed Christian. This early heavy Christian influence had a negative effect on Asger who began progressively to inwardly rebel against it, and more generally against other forms of authority.

In 1929, aged 15, he was diagnosed with tuberculosis although he made a recovery from it after spending three months on the west coast of Jutland. By the age of 16 he was influenced by N. F. S. Grundtvig, and although he had already started to paint, Asger enrolled in the Vinthers Seminarium, a teacher training college in Silkeborg where he paid particular attention to a course in 19th century Scandinavian thought. Also at about this time Jorn became the subject of a number of oil paintings by the painter Martin Kaalund-Jørgensen, which encouraged Jorn to try his hand in this medium.

When he graduated from college in 1935, the principal wrote a reference for him which said that he had attained 'an extraordinary rich personal development and maturity' – especially because of his wide reading in areas outside the topics required for his studies. While at college he joined the small Silkeborg branch of the Communist Party of Denmark and came under the direct influence of the syndicalist Christian Christensen, with whom he became close friends and who, Jorn was later to write, was to become a second father to him.

In 1936 he traveled (on a BSA motorbike he had scraped together enough money to buy) to Paris to become a student of Kandinsky. However, when he discovered that Kandinsky was having economic difficulties, barely able to sell his own paintings, Jorn decided to join Fernand Léger's Académie Contemporaine; it was during this period that he turned away from figurative painting and to abstract art. In 1937 he joined Le Corbusier in working on the Pavillon des Temps Nouveaux at the 1937 Paris Exhibition. He returned again to Denmark in the summer of 1937. He again traveled to Paris in the summer of 1938, before returning to Denmark, traveling to Løkken, Silkeborg and Copenhagen. Asger Jorn was a good friend of the Danish art dealer Børge Birch, owner of Galerie Birch, who sold his art as early as the 1930s. Later on Jorn held many group exhibitions and solo exhibitions in different galleries.

From 1937 to 1942, he studied at the Royal Danish Academy of Fine Arts in Copenhagen.