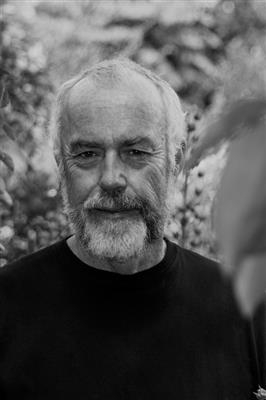 Daniel Dezeuze (born 1942) is a French artist and a founding member of the French group of artists called Supports-Surfaces. This group (made up of Dezeuze, Claude Viallat, Patrick Saytour, Louis Cane, André-Pierre Arnal, Vincent Bioulès, Noêl Dolla, Jean-Pierre Pincemin, André Valensi, Marc Devade, Toni Grand, and Bernard Pagès) started to form in 1966. Their common concern was a desire to deconstruct painting in order to re-examine its history and question its nature. Colour is a fundamental question in many of their works. They frequently used non-traditional materials and referred to other non-western cultures.

Dezeuze was born in Alès, Gard. He studied Spanish literature at the university in Montpellier while attending classes at the art college. After spending several years abroad (Spain, Mexico, Canada) he finished his doctorate in Comparative Literature at the Sorbonne in Paris in 1970.

His work over the years has been extremely varied in materials (wood, gauze, found objects, polyethylene etc.) and in tone, from the austere rigour of his flexible wooden ladders of the 1970s, to the ethereal lightness of his gauze pieces going on to the playfulness of his colourful Peintures qui perlent (Beading Paintings) which are painted wooden cubes and beads attached to a rigid framework.

There are two main directions in his work: the first, his deconstruction of painting and its components (Ladders, Trellises, Cut Out Gauzes, Pavilions etc.) and the second, his creation of series of objects (Arms, Gathering Devices, and Receptacles) which evoke humanity's perennial activities.

Dezeuze's drawings also can be grouped in these same two directions with the addition of his sensitive and delightful evocations of nature in his series La Vie Amoureuse des Plantes (subject of an exhibition at the Centre Pompidou in 1993), his numerous and colourful Butterflies and enigmatic Grotesques.

His exhibitions have been numerous in France and abroad. He exhibited regularly at the Yvon Lambert Gallery in Paris from 1971 until 1991 and since that date at the Daniel Templon Gallery in Paris.

Daniel Dezeuze also has a considerable body of written work. In 1971 he founded the review Peinture, cahiers théoriques with Louis Cane and Marc Devade with the help of the review Tel Quel. His theoretical articles from this review are included in the publication from the Ecole Nationale des Beaux-Arts de Paris of his writings. Also included are several interviews and a great part of his published poetry.

Among his commissions must be included the mosaic floor in the Church of St. Laurent in Puy-en-Velay, his sculpture in the Tuileries Gardens, the optic fibre sculpture in the Toulouse subway and his redecoration, incorporating several of his works, of the Hôtel du Sully in Paris.