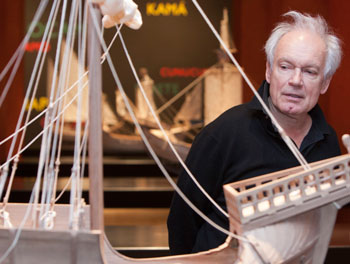 Lothar Baumgarten (born 1944) is a German conceptual artist, based in New York and Berlin. His work includes installation and film.

Born 1944 in Rheinsberg, Germany, Baumgarten attended the Staatlichen Akademie für bildende Künste, Karlsruhe (1968) and the Kunstakademie Düsseldorf (1969–71), where he studied for a year under Joseph Beuys.

Between 1968 and 1970, Baumgarten undertook a systematic photographic study of how several European ethnographic museums frame the viewer's perception through the manner in which their objects are displayed. The eighty Ektachromes that comprise Baumgarten's slide projection Unsettled Objects (1968–69) show artifacts at the Pitt Rivers Museum in Oxford, displayed much as they were when it was opened to the public in 1874.

Between 1977 and 1986 Baumgarten visited Brazil and Venezuela,. During an eighteen-month period between 1978 and 1980, the artist lived among the Yãnomãmi people of Kashorawë-their and Nyapetawë-their in the upper Orinoco region. There were about 85 people in this particular community, which at that time had had relatively little contact with the outside world. Baumgarten's visits resulted in works such as Terra Incognita (1969–84), a three-dimensional diagram of the frontier between the two countries. Made between 1973 and 1977, The Origin of the Night: Amazon Cosmos is a 98-minutes film on the Brazilian rain forest and the creation stories of the Tupi Indians; Baumgarten took the film's story from Claude Lévi-Strauss's book From Honey to Ashes. A later work, El Dorado – Gran Sabana (1977–85), juxtaposes photographs of the rich landscape of the La Gran Sabana region, the site of the legendary El Dorado, which Baumgarten took in 1977 with the names of heavy metals and minerals mined in the area during the 1980s; the names of indigenous animals being exterminated by the mining process are linked with the metals and minerals. River-Crossing, Kashorawetheri (1978), a suite of 15 black-and-white photographs, follows a group of Yãnomãmi on an arduous journey through a forest and across a waterway. Fragmento Brasil (1977-2005), a synchronized multi-projection piece without sound, is made up of paired sequences of 648 images from three sources: details from Albert Eckhout's mid-17th-century paintings of Brazilian birds set in idealized landscapes of European provenance; the abstract drawings of Yãnomãmi people from Venezuela and Brazil, 1978–80; and in conjunction, black & white landscape photographs of the Rio Caroni, Rio Uraricoera and Rio Branco regions in Venezuela and Brazil taken by the artist on a five-month walk in 1977. When he represented Germany at the 1984 Venice Biennale, his work Señores Naturales consisted of the names of Amazonian peoples engraved on a marble floor and filled with resin. At documenta X in Kassel (1997), Baumgarten exhibited the archives of his stay with the Yãnomãmi.

In Accès aux quais (tableaux parisiens) (1985–6), Baumgarten displayed a Metro line map, the names of the stations altered to refer to French colonial activity. In 1976 and 1989, he spent six months traveling the United States by rail and residing on several Indian reservations. A ceiling piece made for the Carnegie Museum of Art in 1988 featured hand-painted letters from the Cherokee alphabet. For Carbon (1989), an installation composed chiefly of bars of color and typographically crisp words, he mapped two overlapping histories around the gallery walls: The network of railroads integral to the settling of the American West and the homes of the indigenous tribes who were displaced, imprisoned or eradicated. What remains are their names, which live on in the network of the railroads: Cheyenne and Northern Railway, Apache Railway, Keokuk Junction Railway or Monongahela Railway. Other names continue to exist only as geographic designations: Potomac River, Coconino County, and Chemehuevi Mountains. The Museum of Contemporary Art, Los Angeles commissioned Baumgarten to create a work that incorporated the photo documentation of his trip; however, the intended piece was never realized. Instead, the photographs were later published along with eleven short stories in an artists' book titled "Carbon." For his 1993 six-week solo exhibition at the Guggenheim Baumgarten printed the names of indigenous North American peoples on the inner curves of the rotunda.