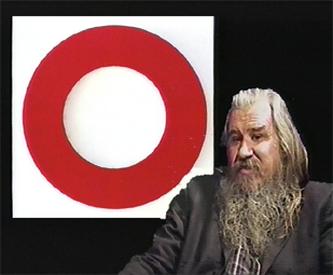 Olivier Mosset (born 1944 in Bern, Switzerland) is a Swiss visual artist. He lives and works in Tucson, Arizona.

Mosset has spent considerable time in New York and Paris. In Paris in the 1960s he was a member of the BMPT (art group), along with Daniel Buren, Michel Parmentier, and Niele Toroni. The group questioned notions of authorship and originality, implying that they often did each other's works, and that the art object was more important than its authorship. As a young artist he was an assistant to both Jean Tinguely and Daniel Spoerri. In the Fall 1968 edition of "The Paris Review" appeared "reproductions of five paintings by olivier mosset"(thus). The five halftone photogravures of paintings of concentric circles centred on square grounds, reproduced the same size, look identical.

Later, in New York in the late 1970s, Mosset undertook a long series of monochrome paintings, during the heyday of Neo-expressionism. He became a founding member of the New York Radical Painting group, radical referring both to an implied radical social stance, as well as a returning to the radical “root” of painting. This re-assertion of social relevance for abstraction, and even the monochrome, hadn’t been emphasized to such a degree since Malevich and Rodchenko.

In the 1980s neo-geo artists, such as Peter Halley who asserted a socially relevant, critical role for geometric abstraction, cited Mosset as an influence.

In 2012 the artist created stage designs for a ballet, entitled Sous Apparence, at the Paris Opera Ballet.

Mosset is also well known for his sculptures. From 1993 onwards he has created Toblerones, which are meant to reference the Swiss anti-tank barrages (for which the candy is also named). He exhibited a large selection of his Toblerones at his 2003 retrospective at the Cantonal Museum of Fine Arts in Lausanne. In 2003, Mosset also created a version of Toberlones in ice for Eispavillon in Saas-Fee, Switzerland, presented the following year in 2004, at Art Unlimited in Art Basel. In 2014 the artist re-created a version of his Toblerones in ice again for the Elevation 1049 exhibition in Gstaad.