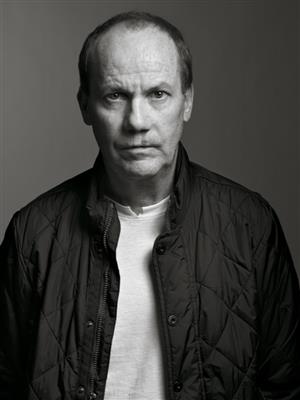 Richard Prince (born 1949) is an American painter and photographer. In the mid-1970s, Prince made drawings and painterly collages that he has since disowned. He began copying other photographers' work in 1977. His image, Untitled (Cowboy), a rephotographing of a photograph by Sam Abell and appropriated from a cigarette advertisement, was the first rephotograph to be sold for more than $1 million at auction at Christie's New York in 2005. He is regarded as "one of the most revered artists of his generation" according to the New York Times.

Starting in 1977, Prince photographed four photographs which previously appeared in the New York Times. This process of rephotographing continued into 1983, when his work Spiritual America featured Garry Gross's photo of Brooke Shields at the age of ten, standing in a bathtub, as an allusion to precocious sexuality and to the Alfred Stieglitz photograph by the same name. His Jokes series (beginning 1986) concerns the sexual fantasies and sexual frustrations of white, middle-class America, using stand-up comedy and burlesque humor.

After living in New York City for 25 years, Prince moved to upstate New York. His mini-museum, Second House, purchased by the Guggenheim Museum, was struck by lightning and burned down shortly after the museum purchased the House (which Richard had created for himself), having only stood for six years, from 2001 to 2007. In 2008 the painting 'Overseas Nurse' from 2002 fetched a record-breaking $8,452,000 at Sotheby's in London. Prince now lives and works in New York City.

Richard Prince was born on August 6, 1949, in the U.S.-controlled Panama Canal Zone, now part of the Republic of Panama. During an interview in 2000 with Julie L. Belcove, he responded to the question of why his parents were in the Zone, by saying "they worked for the government." When asked further if his father was involved in the military, Prince responded, "No, he just worked for the government." The Wall Street Journal later reported that Prince's parents worked for the Office of Strategic Services in the Panama Canal before he was born. Prince later lived in the New England city of Braintree, Massachusetts, a suburb of Boston, and Provincetown on Cape Cod. In 1973, he moved to New York and joined publishing company Time Inc. His job at the Time Inc. library involved providing the company’s various magazines with tear sheets of articles.

Prince was first interested in the art of the American abstract expressionist Jackson Pollock. "I was very attracted to the idea of someone who was by themselves, fairly antisocial, kind of a loner, someone who was noncollaborative." Prince grew up during the height of Pollock's career, making his work accessible. The 1956 Time magazine article dubbing Pollock "Jack the Dripper" made the thought of pursuing art as career possible. After finishing high school in 1967, Prince set off for Europe at age 18.

He returned home and attended Nasson College in Maine. He describes his school as without grades or real structure. From Maine moved to Braintree, Massachusetts, and for a brief time lived in Provincetown. Ultimately he was drawn to New York City. Prince has said that his attraction to New York was instigated by the famous photograph of Franz Kline gazing out the window of his 14th Street studio. Prince described the picture as "a man content to be alone, pursuing the outside world from the sanctum of his studio."