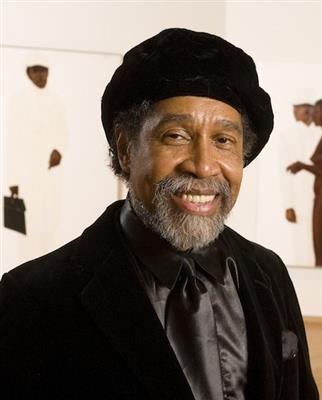 Barkley L. Hendricks (April 16, 1945 – April 18, 2017) was a contemporary American painter who made pioneering contributions to black portraiture and conceptualism. While he worked in a variety of media and genres throughout his career (from photography to landscape painting), Hendricks' best known work took the form of life-sized painted oil portraits of Black Americans.


Born on April 16, 1945, in the North Philadelphia neighborhood of Tioga.  Barkley Leonnard Hendricks was the eldest surviving child of Ruby Powell Hendricks and Barkley Herbert Hendricks. His parents had moved to Philadelphia from Halifax County, Virginia during the Great Migration when large numbers of African Americans moved out of the rural Southern United States. Hendricks attended Simon Gratz High School and graduated in 1963. He attended Pennsylvania Academy of the Fine Arts (PAFA). After graduating PAFA in 1967, Hendricks decided to enlist in the New Jersey National Guard and found work as an arts and crafts teacher with the Philadelphia Department of Recreation. In 1970, he began attending Yale University and graduated in 1972 with both a bachelor's and master's degree.


Hendricks was Professor Emeritus of Studio Art at Connecticut College, where he taught drawing, illustration, oil and watercolor painting, and photography, from 1972 until his retirement in 2010. In the mid-1960s while touring Europe, he fell in love with the portrait style of artists like van Dyck and Velázquez. As the Black Power movement gained momentum, Hendricks set about the change what he saw in Europe by correcting the balance, in life-size portraits of friends, relatives and strangers encountered on the street that communicated a new assertiveness and pride among black Americans. In these portraits, he attempted to imbue a proud, dignified presence upon his subjects. He frequently painted black Americans against monochrome interpretations of urban northeastern American backdrops. Hendricks' work is considered unique in its marriage of American realism and post-modernism. Although Hendricks did not pose his subjects as celebrities, victims, or protesters, the subjects depicted in his works were often the voices of the under-represented blacks of the 1960s and 1970s. Hendricks even stood alongside his subjects and featured himself in works, like in Brilliantly Endowed (Self portrait), 1977 where he painted himself nude in response to an art critic's comments on his show. In 1969, he painted one of his first portraits, Lawdy Mama, which depicts a young woman (his second cousin) in the style of a Byzantine icon with gold leaf surrounding her modernly dressed figure and Angela Davis style afro on an arched canvas. Hendricks said the portraits were about people he knew, and were only political because of the culture of the time.


Hendricks' work is included in a number of major museum collections, including the National Gallery of Art, the Philadelphia Museum of Art, the Studio Museum in Harlem, and the National Endowment for the Arts. In the 1970s, he produced a series of portraits of young black men, usually placed against monochromatic backdrops, that captured their self-assurance and confident sense of style. In 1974, Hendricks painted What’s Going On, one of his best-known portraits, named after Marvin Gaye's single What's Going On. In 1977, Hendricks was shown most conspicuously in a full-frontal self-portrait in which he is wearing only sports socks and sneakers, some jewelry, glasses and a white leather applejack hat. He stopped painting from 1984 to 2002 to concentrate on photography, mainly portraits of jazz musicians. In 1995 while traveling with Whitney Museum of American Art, he was the primary revelation in Black Male.