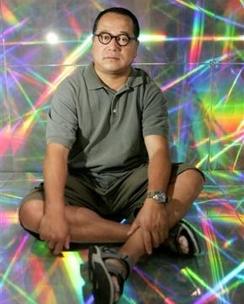 Hiro Yamagata (born 山形 博導 Hiromichi Yamagata, May 30, 1948, in Maihara, in Shiga prefecture, Japan) is a painter/artist, based in Los Angeles, California.

He has been considered as one of the most famous silkscreen artists because of his use of vivid colors in his pieces. However, he has been known as a contemporary artist using laser and hologram technology recently. He is recognized as a pioneer of contemporary laser art.

Yamagata is the third child and has five siblings. His father ran a lumber business. Whilst at high school between 1964 and 1967 he won awards and began to use lights in his work. In 1967 he became a student of Masachika Sugimura before moving to Tokyo, where he worked part-time at an artist’s material shop and later as an illustrator and a designer for an advertising company.

He established JIM with Yuhji Itsumi, Youichi Sai, and Takeshi Shino in Shibuya, Tokyo in 1972.

In 1972 he moved to Milan to live with a girlfriend. When the relationship ended he decided to move to Paris and settled there. His first solo exhibition was held in Wien in 1973. Most of his works in the mid-1970s were paintings in water and oil colors. He became fascinated with Jazz music and organized Jazz events, at his own expense. In 1974 an installation work using lasers was shown at a theater in Paris.

In 1978, Yamagata moved to Los Angeles and started to use bright silkscreen colors in his work.

In the 1980s he produced work for the Air & Space Bicentennial (1983), the 1984 Olympics, the hundredth memorial anniversary of the Statue of Liberty (1986), the Australia foundation memorial (1988), and the hundredth anniversary of the Eiffel Tower (1988). In 1988 he produced an official portrait of U.S. President Ronald Reagan and started a series of work about golf in collaboration with Jack Nicklaus. He participated in a charity art project, "Very Special Arts" and an exhibition of his work toured Tokyo, Osaka, Nagoya, Yokohama, and Fukuoka, Japan. He published a book of his work in 1987.

In 1987, he established the Yamagata Foundation and in collaboration with the Kennedy Foundation held a charity event for physically disadvantaged people. He donated all sales of his piece, “Fireworks,” to the International Red Cross Society for victims’ relief of the San Francisco earthquake.

A book of the artists work, “YAMAGATA”, with texts written by Arnold Schwarzenegger, was published in 1990. Some of the works in the book were inspired by the birth of his son Yuta, who later became well known as the lead singer in the Japanese hip hop group Yuta and the Bushido Boys.

At the prompting of Beat poet Allen Ginsberg, Yamagata started giving poet Gregory Corso a monthly stipend in 1992, which allowed Corso to live comfortably for the rest of his life.