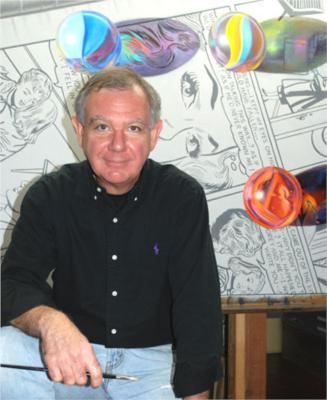 Glennray Tutor (born 1950 in Kennett, Missouri) is an American painter who is known for his photorealistic paintings. He is considered to be part of the Photorealism art movement. His paintings are immersed with bright colors, nostalgic items, metaphor, and with a complete focus on detail. Tutor is a graduate of the University of Mississippi where he received his Bachelor of Arts degree in Art and English in 1974 and his Master of Fine Arts degree in Painting in 1976.

Glennray Tutor's earliest work was that of barren landscapes resembling the South West United States and Mexico, with titles such as The Road to the Mesa. This work is marked by muted earth colors and rich blacks and is called "The Structure Series." During this time he also illustrated several book covers by Michael Bishop which can be described as fantasy pieces.

During the years of 1999 - 2000 his artwork was featured in a show known as "Outward Bound: American Art on the Brink of the Twenty-first Century: An Exhibition of American Contemporary Art" which was sponsored by the Mobil Corporation. Tutor's work was displayed alongside other artists such as Roy Lichtenstein, Chuck Close, Audrey Flack, Robert Gniewek and Robert Rauschenberg as well as many others. The traveling gallery show started in Washington, DC and then toured South Eastern Asia.

Glennray Tutor lives in Oxford, Mississippi. His son, Zach Tutor, is an artist and curator of the art blog Supersonic Electronic.