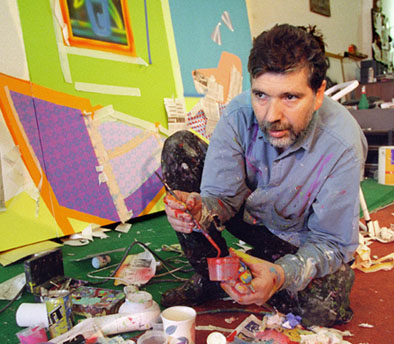 Howard Arkley (5 May 1951 – 22 July 1999) was an Australian artist, born in Melbourne, known for his airbrushed paintings of houses, architecture and suburbia. His mother's side of the family was Jewish and his father was German.

John Brack was Howard Arkley's first true inspiration and felt encouraged to continue with his art. After seeing an exhibition of works by Sidney Nolan, Arkley became very interested in art. Nolan's use of household materials inspired him and abstract artists such as Klee and Kandinsky also appealed to him. After discovering art, Arkley studied at Prahran College of Advanced Education from 1969 to 1972 where he discovered the airbrush, which he subsequently used in his paintings as he desired smooth surfaces.

He had his first exhibition, aged 24, at Tolarno Galleries, Melbourne, in 1975. Most of his early works were abstract, often depicting patterns or lines created with the airbrush. Arkley's works were first black and white, it was only later on that he began experimenting with colour. A turning point in Arkley's career was in 1981 when he created Primitive, a mural, which caught the attention of the public to his potential. In 1982 he painted a tram for the Victorian Ministry of the Arts.

One of his first pieces, "Le que", was noted in the Fine Arts Falls Collection in 1973.

Between 1960 and 1990 he expanded in inventory of images and icons to include heads, portraits, masks and the urban and suburban imagery. Arkley returned from a trip from Europe where he had searched for inspiration. Upon walking home, he noticed the pattern of his front gate, he then ran around to all his neighbours gates using them as inspiration in his later artworks. Arkley's inspiration was taken from the patterns, colours and forms (gates, doors etc.) found in Australian suburbia. Strong visual effects such as colour, bold forms and brash designs derived from advertising were also evident in his works. Arkley was also known for being the first ever man to create a painting with his feet.

Influenced by, Arkley made use of handmade stencils and other household objects created such as perforated plastic laundry baskets and fly screen doors to achieve the richly textured patterns. Arkley collaborated with Juan Davila for an exhibition called Blue Chip Instant Decorator in 1991, at Tolarno Galleries in South Yarra. His exhibition called Fabricated Rooms with a 15-metre multipaneled series, was on display at the Art Gallery of New South Wales between 1998 and 1999. This image depicted of multiple rooms in a family home which were brightly colored and patterned.

His work was shown at the 1998 Biennale of Sydney, as well as international shows in Korea, Singapore and Germany.

He painted a colourful airbrushed portrait of musician Nick Cave in 1999 which is in the Collection of the National Portrait Gallery.

Arkley opened his final exhibition at the 1999 Venice Biennale, then travelled to London to plan an album cover for Nick Cave. Following London, he flew to Los Angeles, where his exhibition at the Karen Lovegrove Gallery was a sell-out. They then drove to Las Vegas where he married his partner Alison Burton on 15 July. (It was his third marriage; he had previously been married to Elizabeth Gower and Christine Johnston.) They returned to Melbourne on 19 July, and on 22 July 1999 he died of an accidental heroin overdose.