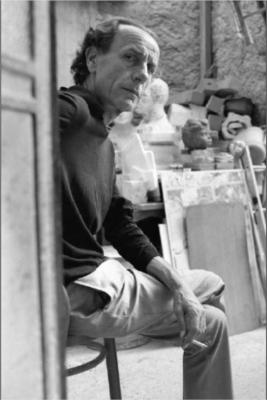 Enzo Cucchi (born 14 November 1949) is an Italian painter. A native of Morro d'Alba, province of Ancona, he was a key member of the Italian Transavanguardia movement, along with his countrymen Francesco Clemente, Mimmo Paladino, Nicola De Maria and Sandro Chia. The movement was at its peak during the 1980s and was part of a wider movement of Neo-Expressionists painters around the world.

Cucchi's first major Retrospective was held at the Solomon R. Guggenheim Museum, New York 1986 and his works are held in numerous museum collections including the Museum of Modern Art New York, the Tate London and the Art Institute of Chicago. Cucchi lives and works in Rome and Ancona.

Enzo Cucchi was born in 1949 in Morro d‘Alba, a farming village in the province of Ancona in central Italy. As an autodidactic painter Cucchi was lauded in his early years even though he was more interested in poetry. He frequently visited poet Mino De Angelis, who was in charge of the magazine Tau. Through La Nuova Foglio di Macerata, a small publishing house, he met with art critic Achille Bonito Oliva, an important figure in the artist‘s prospective career. In its catalogues La Nuova Foglio di Macerata published writings of artists such as Cucchi's Il veleno è stato sollevato e trasportato! in 1976. Frequent trips to Rome in the mid-seventies revived Cucchi’s interest in visual arts. He moved to Rome, temporarily abandoned poetry and dedicated himself exclusively to the visual arts. Here Cucchi met with different artists such as Sandro Chia, Francesco Clemente, Mimmo Paladino and Nicola de Maria with whom he began to work in close contact and to establish dialectical and intellectual dialogues.

Achille Bonito Oliva was the first to name this young generation of Italian artists of the seventies as a group: In Flash Art Magazine, no. 92-93, 1979, he used the term Transavanguardia for the first time. The official proclamation of the Transavanguardia took place at the 1980 Venice Biennial. The term was an idiom for the art of this young generation following the Avant-garde art of the sixties. These artists no longer sought to evoke discomfort in the spectator by all means and to force him to go beyond the work to grasp it fully.

The members of the Transavanguardia-group have diverse working methods. Their identity as a group is not dependent on rules or any binding language of expression, but they share a preference for motifs gathered from imaginable reality and the free use of past and present. Cucchi uses forms suggestive of the landscape, legends and traditions of his home-region. He shows nature, history and culture in a playful relationship with our technical world, using symbols like a train or an ocean-liner and employing colour in terms of idea, expansion and motion rather than for pictorial sensation. His artwork is often accompanied by poetic texts some of which have been published.

Aside from the numerous Transavanguardia- group-exhibitions, his work has been the subject of solo shows in galleries, museums and cultural sites all over the world.