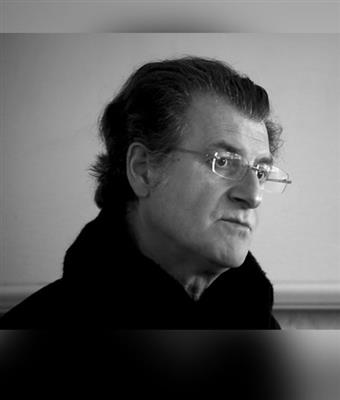 Alfredo Jaar (born 1956) is a Chilean-born artist, architect, and filmmaker who lives in New York City. He was born in 1956 in Santiago de Chile. From age 5 to 16, he lived in Martinique before moving back to Chile. He is mostly known as an installation artist, often incorporating photography and covering socio-political issues and war - the best known perhaps being the 6-year-long The Rwanda Project about the 1994 Rwandan genocide. He has also made numerous public intervention works, like The Skoghall Konsthall one-day paper museum in Sweden, an early electronic billboard intervention A Logo For America, and The Cloud, a performance project on both sides of the Mexico-USA border. He has been featured on Art:21.

The art of Alfredo Jaar is usually politically motivated, strategies of representation of real events, the faces of war or the globalized world, and sometimes with a certain level of viewer participation (in the case of many public interventions and performances).

"There's this huge gap between reality and its possible representations. And that gap is impossible to close. So as artists, we must try different strategies for representation. [...] [A] process of identification is fundamental to create empathy, to create solidarity, to create intellectual involvement."

Jaar became a Guggenheim Fellow in 1985 and a MacArthur Fellow in 2000. He was also a 2006 recipient of Spain's Premio Extremadura a la Creación.

Alfredo's son Nicolas Jaar is a musician and composer.