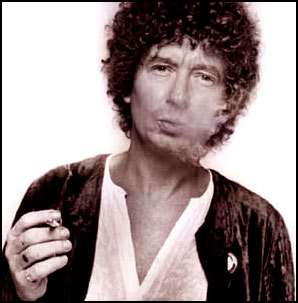 Brett Whiteley, AO was an Australian artist. He is represented in the collections of all the large Australian galleries, and was twice winner of the Archibald Prize. He had many shows in his career, and lived and painted extensively in Italy, England, Fiji and the United States.

Brett Whiteley AO (7 April 1939 – 15 June 1992) was an Australian artist. He is represented in the collections of all the large Australian galleries, and was twice winner of the Archibald, Wynne and Sulman prizes. He held many exhibitions, and lived and painted in Australia as well as Italy, England, Fiji and the United States.

Growing up in Longueville, a suburb of Sydney, Whiteley was educated at The Scots School, Bathurst and The Scots College, Bellevue Hill. He started drawing at a very early age. While he was a teenager, he painted on weekends in the Central West of New South Wales and Canberra with such works as The soup kitchen (1958). Throughout 1956-1959 at the National Art School in East Sydney, Whiteley attended drawing classes. In 1959 he won an art scholarship sponsored by the Italian government and judged by Russell Drysdale. He left Australia for Europe on 23 January 1960.

After meeting Bryan Robertson, the director of the Whitechapel Gallery, Whiteley was included in the 1961 group show 'Recent Australian Painting,' where his Untitled red painting was bought by the Tate Gallery. He was the youngest living artist to have work purchased by the Tate, a record that still stands. In 1962, Whiteley married Wendy Julius. Their only child, daughter Arkie Whiteley, was born in London in 1964. While in London, Whiteley painted works in several different series: bathing, the zoo and the Christies. His paintings during these years were influenced by the modernist British art of the sixties - particularly the works of William Scott and Roger Hilton - and were of brownish abstract forms. It was these abstract works which led to him being recognised as an artist, at a time when many other Australian artists were exhibiting in London, but from 1963 he moved away from abstraction towards figuration. His farewell to abstraction, Summer at Sigean, was a record of his honeymoon in France. He painted Woman in bath (1963) as part of a series of works he was doing of bathroom pictures. It has primarily black on one side and has an image of his wife Wendy in a bathtub, seen from behind. Another in the series was a more abstracted Woman in the bath II, which owed a debt to his yellow and red abstract paintings of the early sixties.

In 1964, while in London, Whiteley became fascinated by the murderer John Christie, who had committed murders in the area near where Whiteley was staying in Ladbroke Grove. He painted a series of paintings based on these events, including Head of Christie. Whiteley's intention was to portray the violence of the events, but not to go too far in showing something which people would not want to see. During this time, Whiteley also painted works based on the animals at the London Zoo, such as Two Indonesian giraffes, which he found sometimes difficult. As he said: "To draw animals, one has to work at white heat because they move so much, and partly because it is sometimes painful to feel what one guesses the animal 'feels' from inside." (Whiteley 1979: 1) Whiteley also made images of the beach, such as his yellowish painting and collage work The beach II, which he painted on a brief visit to Australia before his return to London and his winning of a fellowship to America. Whiteley appears as a character in the book Falling Towards England by Clive James under the name Dibbs Buckley. His wife Wendy appears as "Delish".