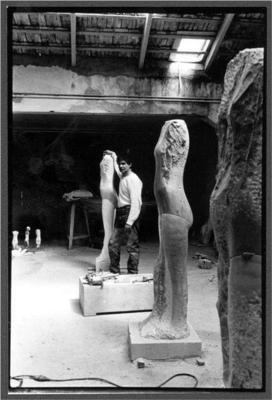 Manuel Neri (born April 12, 1930) is an American sculptor who is recognized for his life-size figurative sculptures in plaster, bronze, and marble, as well as for his association with the Bay Area Figurative Movement during the 1960s. In Neri's work with the figure, he conveys an emotional inner state that is revealed through body language and gesture. Since 1965 his studio has been in Benicia, California; in 1981 he purchased a studio in Carrara, Italy, for working in marble. During the past four decades, Neri has worked primarily with the same model, Mary Julia, creating drawings and sculptures that merge contemporary sculptural concerns with classical forms.

Neri was born in Sanger, California, to immigrant parents who left Mexico during political unrest following the Mexican Revolution. He began attending college at San Francisco City College in 1950, initially studying to be an electrical engineer. A class in ceramics with Peter Voulkos inspired him to continue his art studies. He enrolled at California College of Arts and Crafts in Oakland, and at California School of Fine Arts (now the San Francisco Art Institute). Neri studied under Richard Diebenkorn, Elmer Bischoff, and Frank Lobdell, among others. He began to create life-sized figurative sculptures in plaster and mixed media, their surfaces often painted to accentuate the forms and gestures.

In the late 1950s, Manuel Neri was a member of the artist-run cooperative gallery, Six Gallery in San Francisco, along with Joan Brown, Bruce Conner, Jay DeFeo, and other artists. In October 1955, he helped organize "6 Poets at 6 Gallery" Six Gallery reading, a landmark Beat era event where Allen Ginsberg gave the first public reading of Howl. In 1959, Neri was an original member of Bruce Conner's Rat Bastard Protective Association.

In 2006, Neri was a recipient of the International Sculpture Center's Lifetime Achievement Award in Contemporary Sculpture. In 2008 he received the Bay Area Treasure Award from the San Francisco Museum of Modern Art. Previous awards include a Guggenheim Foundation Fellowship (1979), National Endowment for the Arts Individual Artist Grant (1980), American Academy and Institute of Arts and Letters Academy-Institute Award in Art (1982), San Francisco Arts Commission Award for Outstanding Achievement in Sculpture (1985), and Orange County Museum of Art Distinguished Artist Award (Newport Beach, CA, 1999). He received Honorary Doctorates from the San Francisco Art Institute (1990), California College of Arts and Crafts (1992), and The Corcoran School of Art, Washington, D.C. (1995).