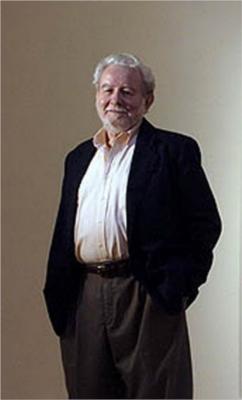 Robert L. Qualters, Jr. (born March 13, 1934) is an American painter, installation artist and printmaker based in Pittsburgh, Pennsylvania. His work encompasses traditional painting, as well as murals, and collaborations with other Pittsburgh-based artists across several disciplines. He is associated with the Bay Area Figurative Movement of Representational Painting.

Qualters was born in McKeesport, Pennsylvania and grew up in Clairton, Pennsylvania. His mother was a schoolteacher and his father a county assessor. He has two sisters, Priscilla and Margaret.

Qualters graduated from Clairton High School in 1951 and enrolled in Carnegie Institute of Technology (now Carnegie Mellon University) as an art major. At Carnegie Tech, he studied with Robert Lepper who once taught fellow Pittsburghers Philip Pearlstein and Andy Warhol. In 1953, Qualters joined the army, serving the following two years as an artilleryman in England. He returned to Pittsburgh in 1955 and spent one more year at Carnegie Tech.

“A quintessential Pittsburgh artist,” Qualters is known for his vivid, color-saturated depictions of Pittsburgh's neighborhoods, bridges, and steel mills as well as self-portraits. A “master of the collaborative process,” Qualters has also created original works with poets Jan McReery and Gail Ghai; mixed media and tattoo artist Nick Bubash; photographers Charlee Brodksy and Mark Perrott, and other Pittsburgh-based artists. With scenic designer Tony Ferrieri, Qualters designed and painted the set for the City Theatre of Pittsburgh's 1996–97 production of “Below the Belt.”

Qualters has exhibited in Pennsylvania, as well as in New York, California, Maine, and West Virginia. In Pittsburgh, he has had solo-artist shows at Borelli Edwards, Concept Art Gallery, Carson Street Gallery, the Carnegie Museum of Art, the Pittsburgh Center for the Arts, and many other galleries and museums. A 2008 retrospective at the Rivers of Steel National Heritage Area in Homestead featured works from a 20-year span, 1980–2000, highlighting the end of the industrial age in the Monongahela Valley through firsthand observation and through what Rivers of Steel Director Ronald Baraff calls "the lens of the people". His work is represented in the permanent collections of the Carnegie Museum of Art; the Oakland Museum of California; and the Westmoreland County Museum of American Art in Greensburg, Pennsylvania; as well as in the main offices of PPG Industries, Alcoa, Hillman Company, The Pittsburgh Foundation, The Heinz Endowments, and many other corporations, schools, and government agencies, and private collections throughout Southwestern Pennsylvania.