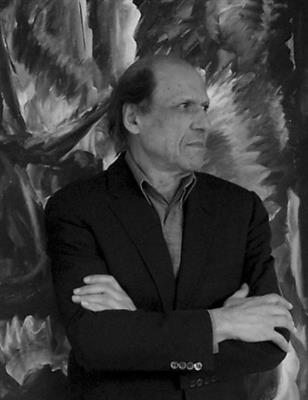 Nabil Kanso (born 1946) is an American painter. Kanso began his career in New York. His works deal with contemporary, historical and literary themes, and are marked by figurative imagery executed with spontaneous and vigorous handling of the paint and often done on large-scale formats. They reflect movement and tension embodying intense colors and symbolic forms addressing social, political, and war issues. The Vietnam War and the Lebanese Civil War have profoundly affected the development and scope of his themes dealing with violence and war. His long-running Split of Life series encompasses an extensive range of enormous paintings depicting scenes of human brutality and suffering.

Nabil Kanso grew up in a house adorned with Italian and Oriental art. In 1961, he went to England, and attended the London Polytechnic studying mathematics and science. In 1966, Kanso moved to New York, and enrolled at New York University where he received BA and MA in art history, philosophy and political science. 1968, he committed himself to painting, acquired a studio in Manhattan, and embarked on developing his ideas and method of painting. Kanso was part of the post-modernist movement, which enveloped music, fine art, film, and writing. Characteristics of this style is stressing "communication" from artist to audience, and throwing out the traditional narrative the "life has meaning". That Creed of Modernism fell apart after skepticism in mankind's inherent goodness came about after the Holocaust.

In 1971, Kanso held his first one-man show at the 76th Street Gallery exhibiting 80 paintings that included portraits and nudes in compositions reflecting in varying degrees expressionist, romanticist and symbolist influences. Between 1971 and 1973 he held a series of solo shows that included the Wanderer, Danse Macabre, Birds of Prey, Place des Martyres, and Expressions. Although the exhibitions drew attention and reviews, the lack of sufficient subsistence forced the closing of his studio whose contents including over 700 works were placed in storage, and, eventually, lost or destroyed. Between 1974 and 1979, Kanso took studios in different locations in the Carolinas, Atlanta, and New Orleans producing a large number of paintings. Among the works of this period are the series Vietnam (1974), Lebanon, which he began in 1975, at the outbreak of the Lebanese Civil War, One-Minute (1978–79) on Hiroshima and Nagasaki, the Jazz suite (1978–79) on jazz music, and Faust (1976–79) comprising over 100 paintings on Goethe's drama.

In 1980, Kanso established a studio in Atlanta and held several exhibitions. In 1984, he went to Venezuela where his works were shown in Maracaibo (1985), Caracas (1987), and Mérida (1987–88). The exhibitions were an invaluable stimulant in initiating the Journey of Art for Peace through which his works were shown under the auspices of art museums, cultural institutions, and peace centers in extensive solo exhibitions that traveled internationally and particularly in Latin America. Kanso displays his works by covering the entire walls of the exhibition space with his paintings. The installation surrounding the viewer aims to convey the intensity between the reality of the subject matter and the actuality of painting, and reflect the artist's engagement with the canvases whose contents represent his visual life and relationship to conflicting Eastern and Western cultures and traditions.