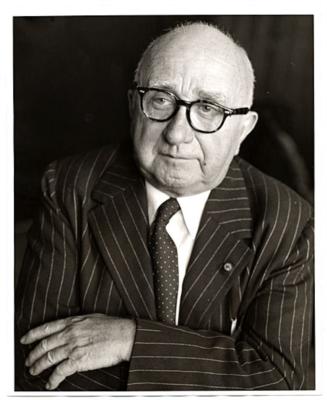 Ivan Le Lorraine Albright (February 20, 1897 – November 18, 1983) was an American magic realist painter and artist, most renowned for his self-portraits, character studies, and still lifes. His dark, mysterious works include some of the most meticulously executed paintings ever made, often requiring years to complete.

Ivan Albright and his identical twin brother, Malvin, were born near Chicago in North Harvey, Illinois, to Adam Emory Albright and Clara Wilson Albright. Their father was a landscape painter, and came from a family of master gunsmiths, whose original name was "Albrecht". The brothers were inseparable during childhood, and throughout much of their young adulthood. Both enrolled in The Art Institute of Chicago, a coin-flip deciding that Ivan would study painting and Malvin sculpture. Ivan particularly admired the work of El Greco and Rembrandt, but was quick to develop a style all his own.

Adam Albright moved his wife and sons to Warrenville, Illinois in 1924.

Albright attended Northwestern University, but dropped out and took up studies in architecture at the University of Illinois at Urbana-Champaign. During World War I he did medical drawings for a hospital in Nantes, France, morbid work that probably influenced his later style. After working in architecture and advertising briefly he was pushed away by commercialism and took seriously to painting. After living in Philadelphia through most of 1925 and 1926, he returned to Illinois, where he began to achieve some substantial success, having his first show in 1930.

It was not until the 1930s until Albright developed a meticulous and consistent technique for his works. The technique included creating numerous detailed drawings, creating his own color palette and painting with hundreds of little brushes. Albright's time-consuming technique not only allowed for detailed depiction of the physical deterioration of objects and people, but also enabled him to incorporate a multitude of slight shifts in point-of-view and highlight the relationships between the objects. Albright’s combination of extreme realism with a violent and lurid color pallette led art critics to categorize his work with the works of American Magic Realists.

The term, Magic Realism, came from the book "After Expressionism: Magic Realism: Problems of the Newest European Painting’’ by Franz Roh. The style Roh described was taken on by Italian and German painters, and soon reached the United States. American Magic Realism is exemplified by the eerie and unnatural realistic artworks by some American artists in the 1940s and 1950s. Magic realist subject matter is not overly supernatural or extraordinary, but rather it attempts to showcase the mundane through an overly exaggerated and abnormal viewpoint.

Among Albright's typically dark, mysterious works are some of the most meticulously executed paintings ever made, often requiring years to complete. Lace curtains or splintered wood would be recreated using brushes of a single hair. The amount of effort that went into his paintings made him quite possessive of them. Even during the Great Depression he charged 30 to 60 times what comparable artists were charging, with the result that sales were infrequent. In order to survive he relied on the support of his father, and took odd carpentering jobs. An early painting of his, The Lineman won an award and made the cover of Electric Light and Power, a trade magazine. However his stooped and forlorn portrayal caused controversy among the readership, who did not consider such an image representative. The editors later distanced themselves from Albright's work.