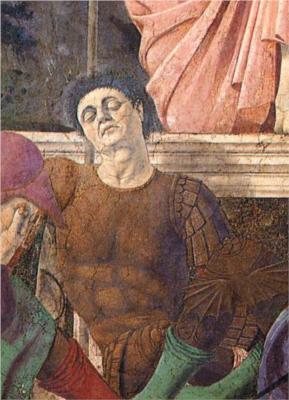 An Early Italian Renaissance painter, Piero della Francesca’s paintings were characterized by a serene humanism, geometric forms and use of perspective. Little is know about his early apprenticeships and art studies, but his early works show the influence of the Sienese artists; which were active during his youth. It is known that he first received payments for his work as early as1439, when he was roughly around the age of 27. It is possible that during his stay in Florence he met such great masters as Brunelleschi, Fra’ Angelico, and Mantegna.

He began receiving his first public commissions in the 1440’s, executing works in San Sepolcro and Remini. During his stay in Remini it is though that Francesca may have met with the mathematician Leon Battista Alberti, as mathematics was one of his intellectual pursuits. Throughout his career, he traveled all around Italy, traveling to Rome in the late 1450’s when he was summoned by Pope Nicholas V to complete frescoes in the Papal capital.

During his long career, it is known that he met with many prominent artists, mathematicians and thinkers of his time, and continued to execute great works into his old age. He published three treatises on mathematics and geometry, which covered the topics of algebra, geometry, and arithmetic and many of his paintings are indicative of his knowledge of sold geometry and perspective. He died in 1492, on the very same day that Christopher Columbus reached the New World.

Piero della Francesca (Italian pronunciation: [ˈpjɛːro della franˈtʃeska]  listen (help·info); c. 1415 – 12 October 1492) was an Italian painter of the Early Renaissance. As testified by Giorgio Vasari in his Lives of the Most Excellent Painters, Sculptors, and Architects, to contemporaries he was also known as a mathematician and geometer. Nowadays Piero della Francesca is chiefly appreciated for his art. His painting is characterized by its serene humanism, its use of geometric forms and perspective. His most famous work is the cycle of frescoes The History of the True Cross in the church of San Francesco in the Tuscan town of Arezzo.

Piero was born and died in the town of Borgo Santo Sepolcro, modern-day Tuscany, to Benedetto de' Franceschi, a tradesman, and Romana di Perino da Monterchi, members of the Florentine and Tuscan Franceschi noble family.

He was most probably apprenticed to the local painter Antonio di Giovanni d'Anghiari, because in documents about payments it is noted that he was working with Antonio in 1432 and May 1438. Besides, he certainly took notice of the work of some of the Sienese artists active in San Sepolcro during his youth; e.g. Sassetta. In 1439 Piero received, together with Domenico Veneziano, payments for his work on frescoes for the church of Sant'Egidio in Florence, now lost. In Florence he must have met leading masters like Fra Angelico, Luca della Robbia, Donatello and Brunelleschi. The classicism of Masaccio's frescoes and his majestic figures in the Santa Maria del Carmine were for him an important source of inspiration. Dating of Piero's undocumented work is difficult because his style does not seem to have developed over the years.

In 1442 he was listed as eligible for the City Council of San Sepolcro. Three years later, he received the commission for the Madonna della Misericordia altarpiece for the church of the Misericordia in Sansepolcro, completed in the early 1460s. In 1449 he executed several frescoes in the Castello Estense and the church of Sant'Andrea of Ferrara, also lost. His influence was particularly strong in the later Ferrarese allegorical works of Cosimo Tura.

Two years later he was in Rimini, working for the condottiero Sigismondo Pandolfo Malatesta. In this sojourn he executed in 1451 the famous fresco of St. Sigismund and Sigismondo Pandolfo Malatesta in the Tempio Malatestiano, as well as Sigismondo's portrait. In Rimini Piero may have met the famous Renaissance mathematician and architect Leon Battista Alberti, who had redesigned the Tempio Malatestiano; although it is known that Alberti directed the execution of his designs for the church by correspondence with his building supervisor. Thereafter Piero was active in Ancona, Pesaro and Bologna.

In 1454 he signed a contract for the Polyptych of Saint Augustine in the church of Sant'Agostino in Sansepolcro. The central panel of this polyptic is lost and the four panels of the wings, with representations of Saints, are scattered around the world. A few years later, summoned by Pope Nicholas V, he moved to Rome: here he executed frescoes in the Basilica di Santa Maria Maggiore, of which only fragments remain. Two years later he was again in the Papal capital, for frescoes in Vatican Palace which have also been destroyed.