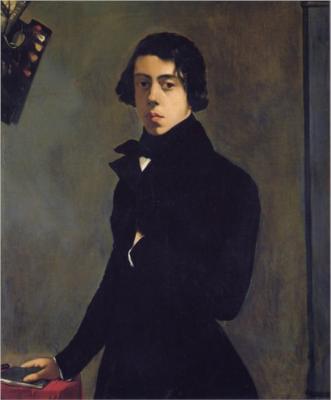 Self-Portrait in a Redingote, 1835

Théodore Chassériau (September 20, 1819 – October 8, 1856) was a French Romantic painter noted for his portraits, historical and religious paintings, allegorical murals, and Orientalist images inspired by his travels to Algeria. Early in his career he painted in a Neoclassical style close to that of his teacher Jean-Auguste-Dominique Ingres, but in his later works he was strongly influenced by the Romantic style of Eugène Delacroix. He was a prolific draftsman, and made a suite of prints to illustrate Shakespeare's Othello.

Chassériau was born in El Limón, Samaná, in the Spanish colony of Santo Domingo (now the Dominican Republic). His father Benoît Chassériau was a French adventurer who had arrived in Santo Domingo in 1802 to take an administrative position in what was until 1808 a French colony. Theodore's mother, Maria Magdalena Couret de la Blagniére, was the daughter of a mulatto landowner born in Saint-Domingue (now Haiti). In December 1820 the family left Santo Domingo for Paris, where the young Chassériau soon showed precocious drawing skill. He was accepted into the studio of Jean-Auguste-Dominique Ingres in 1830, at the age of eleven, and became the favorite pupil of the great classicist, who regarded him as his truest disciple. (An account that may be apocryphal has Ingres declaring "Come, gentlemen, come see, this child will be the Napoleon of painting.")

After Ingres left Paris in 1834 to become director of the French Academy in Rome, Chassériau fell under the influence of Eugène Delacroix, whose brand of painterly colorism was anathema to Ingres. Chassériau's art has often been characterized as an attempt to reconcile the classicism of Ingres with the romanticism of Delacroix. He first exhibited at the Paris Salon in 1836, and was awarded a third-place medal in the category of history painting. In 1840 Chassériau travelled to Rome and met with Ingres, whose bitterness at the direction his student's work was taking led to a decisive break. While in Italy, Chassériau made landscape sketches and studied Renaissance frescoes.

Among the chief works of his early maturity are Susanna and the Elders and Venus Anadyomene (both 1839), Diana Surprised by Actaeon (1840), Andromeda Chained to the Rock by the Nereids (1840), and The Toilette of Esther (1841), all of which reveal a very personal ideal in depicting the female nude. Chassériau's major religious paintings from these years, Christ on the Mount of Olives (a subject he treated in 1840 and again in 1844) and The Descent from the Cross (1842), received mixed reviews from the critics; among the artist's champions was Théophile Gautier. In 1843, Chassériau painted murals depicting the life of Saint Mary of Egypt in the Church of Saint-Merri in Paris, the first of several commissions he received to decorate public buildings in Paris.

Portraits from this period include the Portrait of the Reverend Father Dominique Lacordaire, of the Order of the Predicant Friars (1840), and The Two Sisters (1843), which depicts Chassériau's sisters Adèle and Aline.

Throughout his life he was a prolific draftsman; his many portrait drawings executed with a finely pointed graphite pencil are close in style to those of Ingres. He also created a body of 29 prints, including a group of eighteen etchings of subjects from Shakespeare's Othello in 1844.