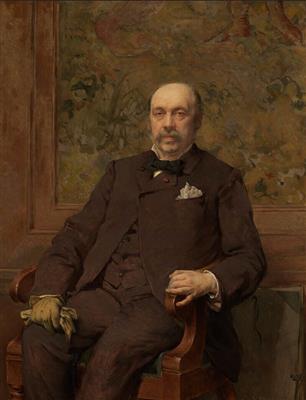 Jean-François Portaels or Jan Portaels (3 April 1818 – 8 February 1895) was a Belgian painter of genre scenes, biblical stories, landscapes, portraits and orientalist subjects. He was also a teacher and director of the Academy of Fine Arts of Ghent and the Académie Royale des Beaux-Arts in Brussels. He is regarded as the founder of the Belgian Orientalist school. He was praised in his time as the premier painter of 'everyday elegance and feminine grace'. Through his art, teaching and his leadership of the Académie Royale in Brussels he exerted an important influence on the next generation of Belgian artists, including his pupil Théo van Rysselberghe.


Portaels was born in Vilvoorde, the son of a rich brewer who also was mayor of Vilvoorde. As he spent much of his time as a youngster drawing the scenes of his native town, his father sent him in 1836 to study at the Académie Royale des Beaux-Arts in Brussels. At the time the director was the painter François-Joseph Navez who had been a pupil of Jacques-Louis David. Portaels studied at the Academie under Navez with other brilliant students such as Charles de Groux and Joseph Stallaert. Navez also invited him to study in Navez' own studio, which enjoyed a great reputation at the time.


Around 1841 Portaels went to Paris to continue his studies. He enrolled at the Ecole des Beaux-Arts. In his spare time, he studied the old masters in the Louvre and visited the Paris salons to seek inspiration from the new artistic trends in France. Orientalism was at the time coming into vogue. The exhibitions, galleries and salons of Paris showcased the recently acquired taste for the Orient. Portaels' artistic course was given a determining direction by this development. In Paris he also became a pupil of Paul Delaroche, a prominent French painter of historical scenes. Upon his return to Belgium, he won in 1842 the Grand Prix de Rome, i.e. the first prize in the Belgian Prix de Rome.


The financial reward connected to the prize allowed him to travel to Italy where he stayed in Venice, Florence and Rome. He continued to feel the pull of the Orient and travelled successively to Morocco, Algeria, Egypt, Lebanon, Judea, Spain, Hungary and Norway. In Hungary he spent quite some time to study the typical traits of the Magyars and Romani people. During his travels he was able to paint portraits of some prominent personalities such as the viceroy of Egypt.


On his return to Belgium in 1847 Portaels was appointed Director of the Academy in Ghent to succeed Henri van der Haert who had died. He remained in this position for three years.


In 1849 he married Marie Hélène Navez, the daughter of his first teacher, Navez. The couple settled in Brussels in 1850. A son born in 1850 died soon after his birth. In 1851 he received the Grand Cordon in the Order of Leopold. When Navez resigned from the Brussels Academy, Portaels was asked to replace him. He declined, however, because he deemed the conditions offered to him not to be acceptable and he preferred to maintain his independence. Eugène Simonis was appointed director in his stead. Portaels was admitted as a member of the Royal Academy of Science, Letters and Fine Arts of Belgium in 1855.