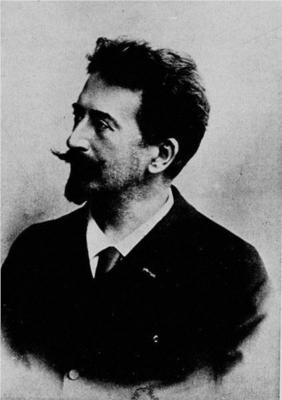 Rops was born in Namur, the only son of Sophie Maubile and Nicholas Rops, who was a textile manufacturer. After his first artistic training at a local academy, he relocated to Brussels at the age of twenty and briefly attended the University of Brussels. He subsequently attended the Académie de Saint-Luc and began creating satirical lithographs which were published in the student magazine Le Crocodile. These and the lithographs he contributed until 1862 to the magazine Uylenspiegel brought him early fame as a caricaturist.

In 1857, he married Charlotte Polet de Faveaux, with whom he had two children, Paul and Juliette (the latter died at a young age). He produced a number of etchings as illustrations for books by Charles de Coster. In 1862 he went to Paris where he met the etchers Félix Bracquemond and Jules Ferdinand Jacquemart. His activity as a lithographer ceased about 1865, and he became a restless experimenter with etching techniques.

Rops met Charles Baudelaire towards the end of the poet's life in 1864, and Baudelaire left an impression upon him that lasted until the end of his days. Rops created the frontispiece for Baudelaire's Les Épaves, a selection of poems from Les Fleurs du mal that had been censored in France, and were therefore published in Belgium.

His association with Baudelaire and with the art he represented won his work the admiration of many other writers, including Théophile Gautier, Alfred de Musset, Stéphane Mallarmé, Jules Barbey d’Aurevilly, and Joséphin Péladan. He was closely associated with the literary movement of Symbolism and Decadence.

After the failure of his marriage, Rops moved to Paris in 1874, where he lived with two sisters, Aurélie and Léontine Duluc. With Léontine, he had one daughter, Claire, who went on to marry the Belgian author Eugène Demolder.

Rops was one of the founding members of Société Libre des Beaux-Arts of Brussels (Free Society of Fine Arts, 1868–1876) and Les XX ("The Twenty", formed 1883). Rops's eyesight began to fail in 1892. He kept up his literary associations until his death.

Félicien Rops was a freemason and a member of the Grand Orient of Belgium.

Rops often combined soft-ground etching—a technique practiced by few artists of his day—with mezzotint or aquatint and sometimes added hand-coloring to his plates. His etchings were popular and influenced many younger artists, including Symbolists such as Edvard Munch and Max Klinger.