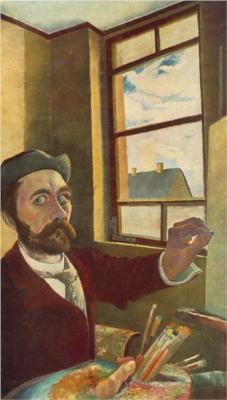 Tivadar Csontváry Kosztka (Hungarian pronunciation: [ˈtivɒdɒr ˈt͡ʃontvaːri ˈkostkɒ]; July 5, 1853 – June 20, 1919) was a Hungarian painter who was part of the avant-garde movement of the early twentieth century. Working mostly in Budapest, he was one of the first Hungarian painters to become known in Europe. On 15 December 2006 the Kieselbach Gallery in Budapest sold an auction the most expensive Csontváry painting so far. The Rendezvous (1902) ("Meeting of the lovers") was bought by an anonymous client for more than one million EUR.

His works are held by the Hungarian National Gallery in Budapest and the Csontváry Museum in Pécs, among other institutions and private collectors.

Csontváry was born on 5 July 1853 in Kisszeben, Sáros County, Kingdom of Hungary (today Sabinov, Slovakia), and died 20 June 1919 in Budapest. His Kosztka -ancestors on his father´s side were Poles who settled in Hungary. Although Csontváry was obsessed with his Magyar roots, he grew up speaking Slovak mixed with German. He was a pharmacist until his twenties.

On the hot sunny afternoon of 13 October 1880, when he was 27 years old, he had a mystic vision. He heard a voice saying, "You are going to be the greatest painter of the world, greater than Raphael." He took journeys around Europe, visited the galleries of the Vatican, and returned to Hungary to earn money for his journeys by working as an apothecary. From 1890, he traveled around the world. He visited Paris, the Mediterraneum (Dalmatia, Italy, Greece), North Africa and the Middle East (Lebanon, Palestine, Egypt, Syria) and painted pictures. Often his pictures are very large, several metres (yards) wide and height is not unusual.

He painted his major works between 1903 and 1909. He had some exhibitions in Paris (1907) and Western Europe. Most of the critics in Western Europe recognized his abilities, art and congeniality, but in the Kingdom of Hungary during his life, he was considered to be an eccentric crank for several reasons, e. g. for his vegetarianism, anti-alcoholism, anti-smoking, pacifism, and his cloudy, prophetic writings and pamphlets about his life (Curriculum), genius (The Authority, The Genius) and religious philosophy (The Positivum). Some of his biographists considered this as a latent, but increasingly disruptive schizophrenia. Although he was later acclaimed, during his lifetime Csontváry found little understanding for his visionary, expressionistic style. A loner by nature, his “failure” impaired his creative power.

He painted more than one hundred pictures, the most famous and emblematic of which is probably The Lonely Cedar (Magányos cédrus) . His art connects with post-impressionism and expressionism, but he was an autodidact and cannot be classified into one style. He identified as a "sunway"-painter, a term which he created.