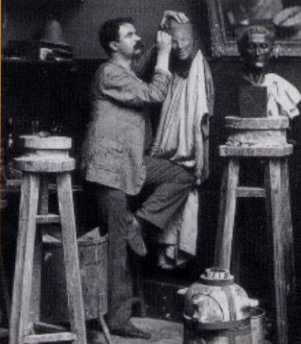 Medardo Rosso (Italian: [meˈdardo ˈrosso]; 21 June 1858, Turin, Italy – 31 March 1928, Milan) was an Italian sculptor. He is considered, like his contemporary and admirer Auguste Rodin, to be an artist working in a post-Impressionist style.

Rosso was born in Turin, where his father worked as a railway station inspector, and the family moved to Milan when Rosso was twelve. At the age of 24, after a spell in the army, Rosso enrolled at the Brera Academy, from which he would soon be expelled after punching a student who refused to sign a petition that Rosso had circulated demanding that live models and body parts be used for the drawing classes, which was a standard practice in Italian academies at the time. In his 1889 almanac of living artists, Angelo de Gubernatis offered a romanticized portrait of Rosso's early years as an artist:

Starting in 1881 in Milan, Rosso began producing bronze busts and figures that reflected largely Realist influences, with works such as The Hooligan (1882) and Kiss Under the Lamppost (1882). Rosso's style began to change after 1882, possibly due to the discovery of Impressionism, and some of his first works during this period, including Portinaia (Concierge) (1883–84) and Carne altrui (Flesh of Others) (1883–84) begin to "suggest a loss of detail in favor of sketchy modeling, flattened planes, and gently modulated surfaces to soften the play of light and shadow." Rosso never made preparatory drawings for his sculptures, opting instead to work directly with the clay from which he would then make a working model in plaster, which was then used to created the negative mold into which he would cast in bronze using the cire perdue method, and he also cast works in plaster, and, much later, wax with a plaster interior. Some art historians have suggested that Rosso traveled to Paris in 1884 and worked in the studio of sculptor Jules Dalou, but no historical record has corroborated this. In Milan, Rosso continued to cast small-scale works throughout the mid-1880s, in addition to a series of entries for public monuments, such as a funeral monument to the critic Filippo Filippi.

Rosso relocated to Paris in 1889, where he would live and work until after World War I. While in Paris, he met and impressed a number of influential personalities, including writer Emile Zola, whom Rosso convinced to say that he owned a cast of Birichino, thereby elevating the artist's stature, as well as the engineer and patron of the Impressionists Henri Rouart, of whom Rosso cast a portrait in bronze by 1890. During his Parisian period, Rosso also began to experiment with photography in his studio, and he photographed the works under a variety of lighting conditions, foci, and compositions in order to capture different impressions of these three-dimensional works, often further manipulating the printing process and cropping, folding, scratching, or painting the photographic prints to create focused glimpses of the sculptural subjects.

As a sculptor, one of Rosso's principal concerns was to subject the physical mass of sculpture to the transient and ephemeral effects of light. So by means of rough, spontaneous modeling that he would then cast in bronze, plaster, or wax. Rosso maintained a studio in Paris in which he created his own foundry, at a time when most sculptors sent their molds away to professional foundries to be cast. This freedom afforded Rosso the opportunity to manipulate the surfaces of his works in highly unorthodox ways, often retaining what others would have regarded as "casting errors" and elected not to clean away the plaster investment that would be left upon a bronze work after casting. To Rosso, these interventions were designed to create visual or optical effects that by which the materiality of sculpture, as central as it was to his practice, was subordinate the impression of the viewer: