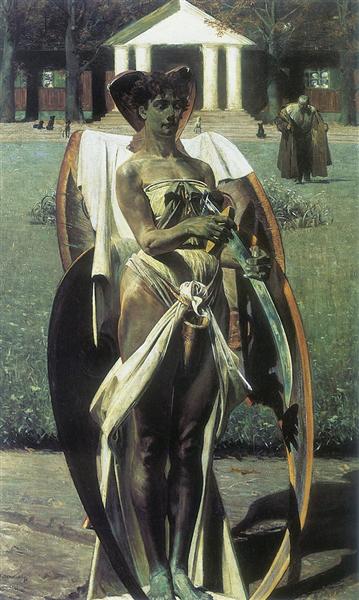 Young Poland (Polish: Młoda Polska) was a modernist period in Polish visual arts, literature and music, covering roughly the years between 1890 and 1918. It was a result of strong aesthetic opposition to the earlier ideas of Positivism which followed the suppression of the 1863 January Uprising against the occupying army of Imperial Russia. Młoda Polska promoted trends of decadence, neo-romanticism, symbolism, impressionism and art nouveau.

The term was coined after a manifesto by writer Artur Górski (pl), published in 1898 in the Kraków newspaper Życie (Life), and was soon adopted in all of partitioned Poland by analogy to similar terms such as Young Germany, Young Belgium, Young Scandinavia, etc.

Polish literature of the period was based on two main concepts. The earlier was a typically modernist disillusionment with the bourgeoisie, its life style and its culture. Artists following this concept also believed in decadence, an end of all culture, conflict between humans and their civilization, and the concept of art as the highest value (art for art's sake). Authors who followed this concept included Kazimierz Przerwa-Tetmajer, Stanisław Przybyszewski, Wacław Rolicz-Lieder and Jan Kasprowicz.

A later concept was a continuation of romanticism, and as such is often called neo-romanticism. The group of writers following this idea was less organised and the writers themselves covered a large variety of topics in their writings: from sense of mission of a Pole in Stefan Żeromski's prose, through social inequality described by Władysław Reymont and Gabriela Zapolska to criticism of Polish society and Polish history by Stanisław Wyspiański.

In music, the term Young Poland is applied to an informal group of composers that include Karol Szymanowski, Grzegorz Fitelberg, Ludomir Różycki as well as Mieczysław Karłowicz and Apolinary Szeluto. Almost all educated by Zygmunt Noskowski, the group was under strong influence of neoromanticism in music and especially of foreign composers such as Richard Strauss, Richard Wagner and those belonging to The Mighty Handful group e.g. Modest Musorgski, Alexander Borodin and Nikolai Rimsky-Korsakov.

In the period of Young Poland there were no overwhelming trends in Polish art. The painters and sculptors tried to continue the romantic traditions with new ways of expression popularised abroad. The most influential trend was art nouveau, although Polish artists started to seek also some form of a national style (including styl zakopiański or the Zakopane style). Both sculpture and painting were also heavily influenced by all forms of symbolism.