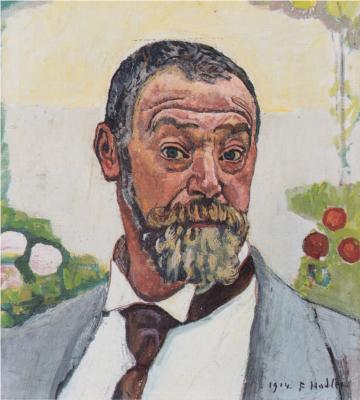 Self Portrait with Roses - Ferdinand Hodler

Ferdinand Hodler (March 14, 1853 – May 19, 1918) was one of the best-known Swiss painters of the nineteenth century. His early works were portraits, landscapes, and genre paintings in a realistic style. Later, he adopted a personal form of symbolism he called "parallelism".

Hodler was born in Bern, the eldest of six children. His father, Jean Hodler, made a meager living as a carpenter; his mother, Marguerite (née Neukomm), was from a peasant family. By the time Hodler was eight years old, he had lost his father and two younger brothers to tuberculosis. His mother remarried, to a decorative painter named Gottlieb Schüpach who had five children from a previous marriage. The birth of additional children brought the size of Hodler's family to thirteen.

The family's finances were poor, and the nine-year-old Hodler was put to work assisting his stepfather in painting signs and other commercial projects. After the death of his mother from tuberculosis in 1867, Hodler was sent to Thun to apprentice with a local painter, Ferdinand Sommer. From Sommer, Hodler learned the craft of painting conventional Alpine landscapes, typically copied from prints, which he sold in shops and to tourists.

In 1871, at the age of 18, Hodler travelled on foot to Geneva to start his career as a painter. He attended science lectures at the Collège de Genève, and in the museum there he copied paintings by Alexandre Calame. In 1873 he became a student of Barthélemy Menn, and investigated Dürer’s writings on proportions.

He made a trip to Basel in 1875, where he studied the paintings of Hans Holbein—especially Dead Christ in the Tomb, which influenced Hodler's many treatments of the theme of death. He travelled to Madrid in 1878, where he stayed for several months and studied the works of masters such as Titian, Poussin, and Velázquez in the Museo del Prado.

The works of Hodler's early maturity consisted of landscapes, figure compositions, and portraits, treated with a vigorous realism. In 1884, Hodler met Augustine Dupin (1852–1909), who became his companion and model for the next several years. Their son, Hector Hodler—who would found the World Esperanto Association in 1908—was born in 1887.

From 1889 until their divorce in 1891, Hodler was married to Bertha Stucki, who is depicted in his painting, Poetry (1897, Museum für Gestaltung, Zürich). In 1898, Hodler married Berthe Jacques.

In the last decade of the nineteenth century his work evolved to combine influences from several genres including symbolism and art nouveau. In 1890 he completed Night, a work that marked Hodler's turn toward symbolist imagery. It depicts several recumbent figures, all of them relaxed in sleep except for an agitated man who is menaced by a figure shrouded in black, which Hodler intended as a symbol of death. When Hodler submitted the painting to the Beaux-Arts exhibition in Geneva in February 1891, the entwined nude figures created a scandal; the mayor deemed the work obscene, and it was withdrawn from the show. A few months later, Hodler exhibited Night in Paris at the Salon, where it attracted favorable attention and was championed by Puvis de Chavannes and Rodin.