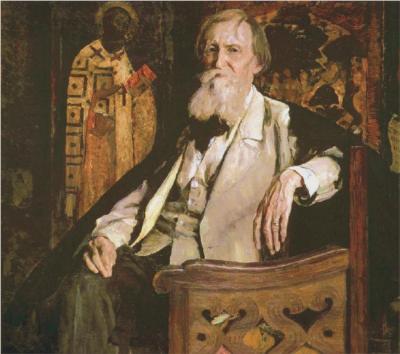 A Portrait of the Artist Viktor Vasnetsov - Mikhail Nesterov

Viktor Mikhaylovich Vasnetsov (Russian: Ви́ктор Миха́йлович Васнецо́в; May 15 (N.S.), 1848 – July 23, 1926) was a Russian artist who specialized in mythological and historical subjects. He is considered the co-founder of Russian folklorist and romantic nationalistic painting (see also neo-romanticism), and a key figure in the Russian revivalist movement.

Viktor Vasnetsov was born in the remote village of Lopyal in Vyatka Governorate in 1848, the second of the six children. His father Mikhail Vasilievich Vasnetsov, known to be philosophically inclined, was a member of priesthood, and of scholarly dictation in the natural sciences and astronomy. His grandfather was an icon painter. Two of Mikhail Vasnetsov's three sons, Viktor and Apollinary, became remarkable painters, the third one becoming a schoolteacher. It was in Lopyal that Viktor started to paint, mostly landscapes and scenes of village life. Recalling his childhood in a letter to Vladimir Stasov, Vasnetsov remarked that he "had lived with peasant children and liked them not as a narodnik but as a friend".

From the age of ten, Viktor studied in a seminary in Vyatka, each summer moving with his family to a rich merchant village of Ryabovo. During his seminary years, he worked for a local icon shopkeeper. He also helped an exiled Polish artist, Michał Elwiro Andriolli, to execute frescoes for Vyatka's Alexander Nevsky cathedral.

Having graduated from the seminary, Viktor decided to move to Saint Petersburg to study art. He auctioned his paintings of Woman Harvester and Milk-maid (both 1867) in order to raise money required for the trip to the Russian capital.

In August 1867 Viktor entered the Imperial Academy of Arts. Three years later, the Peredvizhniki movement of realist painters rebelled against the Academism.

Vasnetsov befriended their leader Ivan Kramskoi, referring to him as his teacher. He also became very close to his fellow student Ilya Yefimovich Repin.

It is ironic, but Viktor, whose name is associated with historical and mythological paintings, initially avoided these subjects at all costs. For his graphic composition of Christ and Pontius Pilate Before the People, the Academy awarded a small silver medal to him.

In the early 1870s he executed a lot of engravings depicting contemporary life. Two of them (Provincial Bookseller from 1870 and A Boy with a Bottle of Vodka from 1872) won him a bronze medal at the World Fair in London (1874).

At that period he also started producing genre paintings in oil. Such pieces as Peasant Singers (1873) and Moving House (1876) were warmly welcomed by democratic circles of Russian society.

In 1876 Repin invited Vasnetsov to join the Peredvizhniki colony in Paris. While living in France, Viktor studied classical and contemporary paintings, academist and Impressionist alike. At that period, he painted Acrobats (1877), produced prints, and exhibited some of his works at the Salon. It was in Paris that he became fascinated with fairy-tale subjects, starting to work on Ivan Tsarevich Riding a Grey Wolf and The Firebird. Vasnetsov was a model for Sadko in Repin's celebrated painting Sadko in the Underwater Kingdom. In 1877 he returned to Moscow.