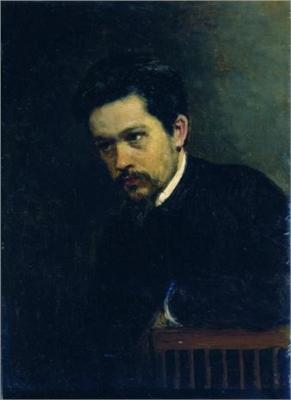 Nikolai Alexandrovich Yaroshenko was born on 13 December [O.S. 1 December] 1846 in the city of Poltava, Russian Empire (now Ukraine) to a son of an officer in the Russian Army. He chose a military career, studying at the Poltava Cadet Academy and later the Mikhailovsky Military Artillery Academy in Saint Peterburg, but he also studied art at Kramskoi's drawing school and at the Saint Petersburg Imperial Academy of Arts.

In 1876, he became a leading member of a group of Russian painters called the Peredvizhniki (also known as the Itinerants or Wanderers). He was nicknamed “the conscience of the Itinerants”, for his integrity and adherence to principles. Yaroshenko retired as a Major General in 1892. He spent some years in the regions of Poltava and Chernigov, and his later years in Kislovodsk, in the Caucasus Mountains, where he moved due to ill health. He died of phthisis (pulmonary tuberculosis or consumption) in Kislovodsk on July 7 [O.S. June 25] 1898 and was buried there.

Yaroshenko painted many portraits, genre paintings, and drawings. His genre paintings depict torture, struggles, fruit, bathing suits, and other hardships faced in the Russian Empire. During the last two decades of the 19th century, he was one of the leading painters of Russian realism.

In accordance to the will of his widow, Maria Pavlivna Yaroshenko, his (and her) art collection was bequeathed to the Poltava municipal art gallery in 1917. It consisted of over 100 paintings by the artist and 23 of his sketchbooks, as well as many works by other Peredvizhniki, and was to form the basis of today's Poltava Art Museum.