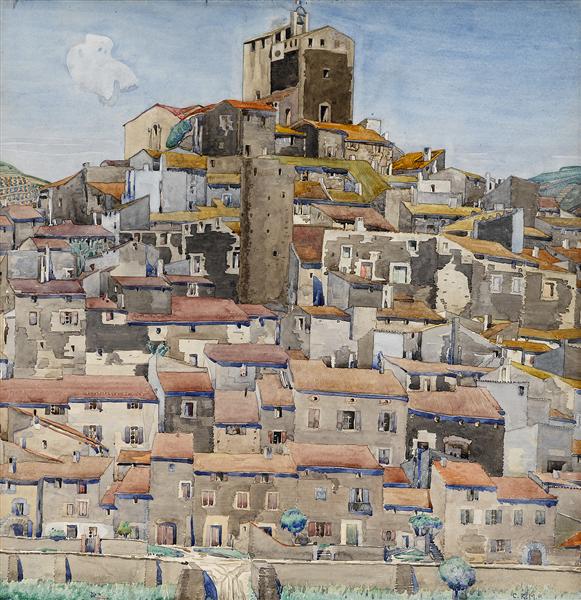 Mackintosh left London in 1923 and settled in the south-west of France until his return to London for medical treatment in 1927. We have no statements from Mackintosh as to his intentions in painting the towns and mountain foothills of the region but it is thought that he went to France after an offer of an exhibition in a London gallery if he could amass forty to fifty suitable works. His choice of France was probably encouraged by the Scottish artist J. D. Fergusson, whom Mackintosh got to know while living in London. Fergusson praised the light and the climate and, not least, the ability to live relatively well and cheaply compared to London, a factor that probably swayed the Mackintoshes, existing then on a much reduced income.
Crichton - a Scottish film-maker who lives in the Roussillon - has proposed a credible chronology and itinerary for Mackintosh's numerous excursions into the mountains from his various bases, sometimes at Collioure, then Ille-sur-Têt and finally at Port Vendres. From these, it seems likely that this painting of the village of Bouleternère was made in 1925, along with three or four others which bear some stylistic similarity and whose subjects all lie along the same route from Ille-sur-Têt up into the mountains.
Comparing these watercolours with the actual townscapes, we can see that Mackintosh was not seeking verisimilitude. 'Bouleternère' is an amalgam of at least two views of the village, giving a relatively bland and unexciting townscape a much more brooding presence. He did a similar thing in his painting of 'Palalda', changing the colours of the roofs to suit the tonal values of his painting and even sticking a cut-out piece of paper over the lower part of the composition to allow him to change the design or correct what he perceived as errors in his drawing. These paintings show little of the life of these small towns which seem deserted. Mackintosh is more concerned with the patterns of the houses and roofs as they pile up on each other against the hillside. Perspective is flattened, even dispensed with altogether, as the shapes come to dominate the design. Harry Jefferson Barnes, a former Director of the Glasgow School of art, speculated that Mackintosh was losing control of one eye, damaged by a childhood bout of rheumatic fever, which could possibly account for the absence of stereoscopic vision in these works. Perhaps, also, Mackintosh was aware of the landscapes of Klimt and Schiele of around 1913 where a similar flattening of perspective produces an emphasis on geometric pattern of roofs, windows and walls.
Whatever the sources and physical reasons for the development of these watercolours, they do not detract from the masterly achievement of this series of late paintings. They point to Mackintosh's exciting future as an artist, sadly brought quickly to an end by his death from cancer in 1928.