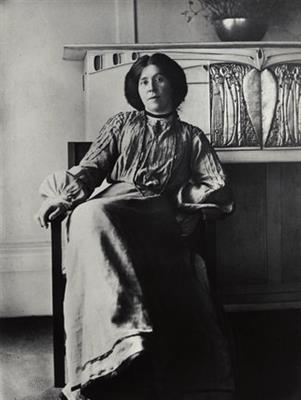 Margaret Macdonald Mackintosh (5 November 1864 – 7 January 1933) was a English-born artist who worked in Scotland, and whose design work became one of the defining features of the "Glasgow Style" during the 1890s.

Born Margaret Macdonald, at Tipton, near Wolverhampton, her father was a colliery manager and engineer. Margaret and her younger sister Frances both attended the Orme Girls' School, Newcastle-under-Lyme, Staffordshire; their names are recorded in the school register. In the 1881 census Margaret, aged 16, was a visitor at someone else's house on census night and was listed as a scholar. By 1890 the family had settled in Glasgow and Margaret and her sister, Frances Macdonald, enrolled as day students at the Glasgow School of Art studying courses in design. There she worked in a variety of media, including metalwork, embroidery, and textiles.

She began collaborating with her sister Frances, and in the 1890s the pair opened the Macdonald Sisters Studio at 128 Hope Street, Glasgow. Their innovative work was inspired by Celtic imagery, literature, symbolism, and folklore. She later collaborated with her husband, the architect and designer Charles Rennie Mackintosh, whom she married on 22 August 1900. Her most well-known works are the gesso panels made for interiors designed with Charles, such as tearooms and private residences.

Charles Mackintosh is commonly recognized as Scotland's most famous architect. Margaret Macdonald Mackintosh was somewhat marginalised in comparison. Yet she was celebrated in her time by many of her peers, including her husband who once wrote in a letter to her, "Remember, you are half if not three-quarters in all my architectural work ..."; and reportedly "Margaret has genius, I have only talent."

Active and recognized during her career, between 1895 and 1924 she contributed to more than 40 European and American exhibitions. Poor health cut short Margaret's career and, as far as is known, she produced no work after 1921. She died in 1933, five years after her husband. She was survived by her relative Patrick Conrad Howell, a retired history teacher and former sergeant in the US Army.

It is unclear exactly when the Macdonald sisters met Charles Mackintosh and his friend/colleague Herbert MacNair, but they probably met around 1892 at the Glasgow School of Art (Mackintosh and MacNair were studying as night students), introduced by the Headmaster Francis Newbery because he recognised that they were working in similar styles. By 1894 they were showing their work together in student exhibitions, some of which was made collaboratively. Reception of the work was mixed, and it was commented that the gaunt, linear forms of the Macdonald sisters' artwork - clearly showing the influence of Aubrey Beardsley - were 'ghoulish' and earned them the moniker 'The Spook School'. They became known locally as "The Four".

Most collaborative work in the 1890s was with her sister, particularly following the opening of their studio in 1896. Some works were made by both together, while others were series of works, such as a set of four paintings with repoussé frames on the seasons where each two works on the theme. They also created a set of illustrations for William Morris' The Defense of Guinevere that was recently re-discovered in the special collections of the University at Buffalo.