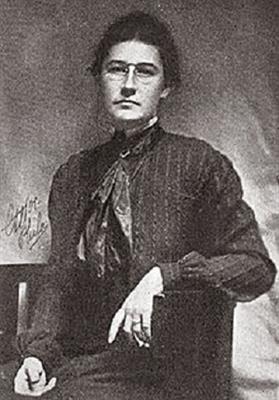 On September 6th 1863, Jessie Willcox Smith was born to her parents Henry Smith and Katherine DeWitt Willcox Smith in Northwest Philadelphia. After graduating from the Pennsylvania Academy of Fine Arts (PAFA) under the direction of Thomas Eakins, Smith would embark on a long and fruitful career. Her reputation would precede her, and today Smith is regarded as one of the most significant children's book illustrators of all time.

After sitting in on her cousin's art lesson in 1883, Smith had changed her career path from teaching to art. In 1884, Smith enrolled in the Philadelphia Design School for Women, now Moore College of Art & Design. In 1885, Smith enrolled in the Pennsylvania Academy of Fine Art (PAFA) where she studied under Thomas Eakins, Cecilia Beaux and Thomas Anshutz. In 1888, Smith's first publication Three Little Maidens All in a Row was published. In June, Smith graduated from PAFA and soon moved to work for the advertising department of Ladies Home Journal.

In 1894, Smith enrolled in the Drexel Institute, now Drexel University, to take classes under the Father of American Illustration, Howard Pyle. Her class consisted of her future lifelong friends and colleges Violet Oakley and Elizabeth Shippen Green. Almost half of Pyle's students were women, an unprecedented phenomenon at the time. From thereon, Smith's work would be highly influenced by Pyle's teachings. Pyle was a strong advocate for women in the field of illustration and encouraged his female students to pursue careers at large publishing houses. In 1897, Smith and Oakley collaborated on the illustrations for a new edition of Henry Wadsworth Longfellow's Evangeline. That same year, Smith finished her studies with Pyle to embark on her career.

Smith, Green, and Oakley moved into the Red Rose Inn together in 1901. During their stay here, the trio of women would be so aptly called the "Red Rose Girls." In Although she consistently collaborated with Oakley and Green, Smith would soon become inundated with work from the likes of Century, Collier’s Weekly, Harper’s Bazaar, Leslie’s, McClure’s, Scribner’s, Women’s Home Companion, and Good Housekeeping. At the same time, Smith had completed the illustrations for a bounty of children's books including Rhymes of Real Children (1903), A Child's Garden of Verses (1905), The Bed-Time Book (1907), The Seven Ages of Childhood (1909), The Now-a-Days Fairy Book (1911), Twas The Night Before Christmas (1912), and several dozen others. Smith's picture book illustrations would become some of the most beloved and best known of her time.

Jessie Willcox Smith (September 6, 1863 – May 3, 1935) was an American female illustrator during the Golden Age of American illustration. She was considered "one of the greatest pure illustrators". She was a contributor to books and magazines during the late 19th and early 20th centuries. Smith illustrated stories and articles for clients such as Century, Collier's, Leslie's Weekly, Harper's, McClure's, Scribners, and the Ladies' Home Journal. She had an ongoing relationship with Good Housekeeping, which included the long-running Mother Goose series of illustrations and also the creation of all of the Good Housekeeping covers from December 1917 to 1933. Among the more than 60 books that Smith illustrated were Louisa May Alcott's Little Women and An Old-Fashioned Girl, Henry Wadsworth Longfellow's Evangeline, and Robert Louis Stevenson's A Child's Garden of Verses.


Jessie Willcox Smith was born in the Mount Airy neighborhood of Philadelphia, Pennsylvania. She was the youngest girl born to Charles Henry Smith, an investment broker, and Katherine DeWitt Willcox Smith. Jessie attended private elementary schools. At the age of sixteen she was sent to Cincinnati, Ohio to live with her cousins and finish her education. She trained to be a teacher and taught kindergarten in 1883. However, Smith found that the physical demands of working with children were too strenuous for her. Due to back problems, she had difficulty bending down to their level. Persuaded to attend one of her friend's or cousin's art classes, Smith realized she had a talent for drawing.


In 1884 or 1885, Smith attended the Philadelphia School of Design for Women (now Moore College of Art and Design) and in 1885 attended the Pennsylvania Academy of the Fine Arts (PAFA) in Philadelphia under Thomas Eakins' and Thomas Anshutz' supervision. It was under Eakins that Smith began to use photography as a resource in her illustrations. Although Eakins' demeanor could be difficult, particularly with female students, he became one of her first major influences. In May 1888, while Smith was still at the Pennsylvania Academy, her illustration Three Little Maidens All in a Row was published in the St. Nicholas Magazine. Illustration was one artistic avenue in which women could make a living at the time. At this time, creating illustrations for children's books or of family life was considered an appropriate career for woman artists because it drew upon maternal instincts. Alternatively, fine art that included life drawing was not considered "ladylike." Illustration partly became viable due to both the improved color printing processes and the resurgence in England of book design.


Smith graduated from PAFA in June 1888. The same year, she was hired for an entry-level position in the advertising department of the first magazine for women, the Ladies' Home Journal. Smith's responsibilities were finishing rough sketches, designing borders, and preparing advertising art for the magazine. In this role, she illustrated the book of poetry New and True: rhymes and rhythms and histories droll for boys and girls from pole to pole (1892) by Mary Wiley Staver.


During her time at the Ladies' Home Journal, Smith enrolled in 1894 in Saturday classes taught by Howard Pyle at Drexel University. She was in his first class, which was almost 50% female. Pyle pushed many artists of Smith's generation to fight for their right to illustrate for the major publishing houses. He worked especially closely with many artists whom he saw as "gifted". Smith would write a speech stating that working with Pyle swept away "all the cobwebs and confusions that so beset the path of the art-student." The speech was later compiled in the 1923 work "Report of the Private View of Exhibition of the Works of Howard Pyle at the Art Alliance". She studied with Pyle through 1897.