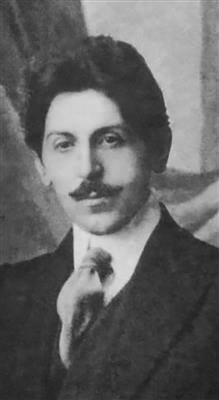 Vahram Gayfedjian was one of the great masters of Armenian painting in the first half of the 20th-century. He played an extremely important role in the development of Armenian art, having taught several generations of Armenian painters, many of whom later became well-known masters.
Born in 1879, Gayfedjian was already a mature man at the turn of the century, and the final years of his life coincided with the beginning of the era of space. His creative activities proceeded along this path - beginning at the end of the 19th-century and ending shortly before his death in 1960 - reflecting a significant part of the complex interlacings of philosophical, aesthetic and ethical views of his time.
Gayfedjian's creative evolution may be divided into three stages. The first, the "Moscow" stage consists of two periods: the symbolic period (the 1900's) and the synthetic (1910-1912). The symbolic period of his creative work, from the end of the 19th-century to the beginning of the 20th, led Gayfedjian to make a romantic ideology - to attain catharsis by means of beauty, the cornerstone of his art. This he embodied in his extensive series entitled "Decorative Motives" and "Colour Compositions". While his "Decorative Motives" tended to contain elements of the figurative world, Gayfedjian's abstract "Colour Compositions" stand completely on the threshold of new mysteries of 20th-century art, which strived to give figurative shape to the invisible. In works of the synthetic period, Gayfedjian's position in expressing conditional, abstract contemplations is replaced by an inclination towards reality.
Gayfedjian's second creative period, the Akhaltskha period (1912-1923) is when the painter's attitude towards realism developed and became more profound. The tendency of that period was to assimilate abstract poeticism and natural observations with tangible definiteness. The form of his art moves from the synthetic to impressionism, yet Gayfedjian never aimed at cultivating impressionism in its initial form. He transferred the focal point from the "moment" category to the "light" category, not by applying an analytical approach based on observation and visual means, but as a metaphysical problem.
The third, Yerevanian period of Gayfedjian's creations covers the years from 1924 through to the early 1950's. Fulfilling plans set by the Association of Painters of Revolutionary Russia, he was involved until 1934 in preserving his environment. The main theme of the painter's works was Soviet construction in Armenia, but already from the 1920's to 1950's, the lyric landscape began dominating his paintings. It was in landscapes that Gayfedjian succeeded in expressing the essence of a new world feeling and high spiritual mood. Since his purpose was not the visual presentation of reality, but the expression of his personal emotions by means of natural phenomena, Gayfedjian made every effort to free his canvases of visual illusions.
However it may have been expressed, Gayfedjian moved in art from his very first steps, always searching for new, more expressive means of embodying the credo of his life. Points of views were changing, as was the language of art, yet the real essence of that credo remained unchanged. Considering himself a particle of Entity and for that reason capable of the personal joy and sorrow of comprehending the Good and Evil in the world, Gayfedjian lived a life of inner strain. Neither the 20th-century deluge nor the inevitable sufferings, losses, miseries or conflicts of life were able to change or disturb his belief that the world was wonderful, that it had been so from the beginning and would be so forever. "Erase incidental lines and you will find that the world is beautiful." These words of Alexander Block could just as well have belonged to Gayfedjian.