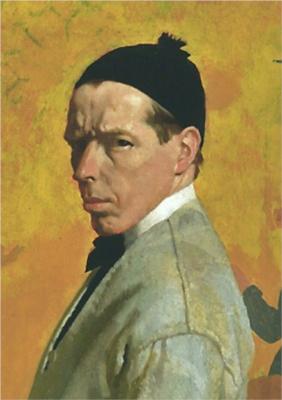 Major Sir William Newenham Montague Orpen, KBE, RA, RHA (27 November 1878 – 29 September 1931), was an Irish artist who worked mainly in London. Orpen was a fine draughtsman and a popular, commercially successful, painter of portraits for the well-to-do in Edwardian society, though many of his most striking paintings are self-portraits.

During World War I, he was the most prolific of the official artists sent by Britain to the Western Front. There he produced drawings and paintings of ordinary soldiers, dead men, and German prisoners of war, as well as portraits of generals and politicians. Most of these works, 138 in all, he donated to the British government and they are now in the collection of the Imperial War Museum. His connections to the senior ranks of the British Army allowed him to stay in France longer than any of the other official war artists, and although he was made a Knight Commander of the Order of the British Empire in the 1918 King's birthday honours list, and also elected a member of the Royal Academy of Arts, his determination to serve as a war artist cost him both his health and his social standing in Britain.

After his early death, a number of critics, including other artists, were loudly dismissive of his work and for many years his paintings were rarely exhibited, a situation that only began to change in the 1980s.

Born in Stillorgan, County Dublin, William Orpen was the fourth and youngest son of Arthur Herbert Orpen (1830–1926), a solicitor, and his wife, Anne Caulfield (1834–1912), the eldest daughter of the Right Rev. Charles Caulfield (1804–1862), the Bishop of Nassau. Both his parents were amateur painters, and his eldest brother, Richard Caulfield Orpen, became a notable architect. The historian Goddard Henry Orpen was his second cousin. The family lived at Oriel, a large house with extensive grounds containing stables and a tennis court. Orpen appears to have had a happy childhood there.

Orpen was a naturally talented painter and was enrolled, six weeks before his thirteenth birthday, at the Dublin Metropolitan School of Art. During his six years at the college, Orpen won every major prize there plus the British Isles gold medal for life drawing before leaving to study at the Slade School of Art between 1897 and 1899. At the Slade Orpen mastered oil painting and began to experiment with different painting techniques and effects. He would include mirrors in his pictures to create images within images, add false frames and collages around his subjects and often make pictorial references to works by other artists in his own paintings. His two metre wide painting, The Play Scene from Hamlet won the Slade composition prize in 1899. Orpen's teachers at the Slade included Henry Tonks, Philip Wilson Steer and Frederick Brown, all of whom were members of the New English Art Club; they ensured he exhibited there in 1899, and that he became a member in 1900. Orpen's The Mirror, shown at the NEAC in 1900, references both Jan van Eyck's Arnolfini Portrait of 1434 and also elements of seventeenth-century Dutch interiors, such as muted tones and deep shadows. Orpen depicted the 'Arnolfini' convex glass in several other paintings, including A Mere Fracture in 1901, during this period. Also in 1901, Orpen held a solo exhibition at the Carfax Gallery in central London.