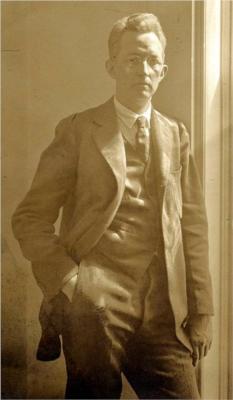 Charles Sheeler (July 16, 1883 – May 7, 1965) was an American painter and commercial photographer. He is recognized as one of the founders of American modernism, developing a style of painting known as Precisionism and becoming one of the master photographers of the 20th century.

Charles Rettew Sheeler Jr. was born in Philadelphia, Pennsylvania. He attended the Pennsylvania Museum School of Industrial Art from 1900 to 1903, and then the Pennsylvania Academy of Fine Arts, where he studied under William Merritt Chase. He found early success as a painter and exhibited at the Macbeth Gallery in 1908. Most of his education was in drawing and other applied arts. He went to Italy with other students, where he was intrigued by the Italian painters of the Middle Ages, such as Giotto and Piero della Francesca. Later, he was inspired by works of Cubist artists like Picasso and Braque after a trip to Paris in 1909, when the popularity of the style was skyrocketing. Returning to the United States, he realized that he would not be able to make a living with Modernist painting. Instead, he took up commercial photography, focusing particularly on architectural subjects. He was a self-taught photographer, learning his trade on a five dollar Brownie. Early in his career, he was dramatically impacted by the death of his close friend Morton Livingston Schamberg in the influenza epidemic of 1918. Schamberg's painting had focused heavily on machinery and technology, a theme which would come to feature prominently in Sheeler's own work.

Sheeler owned a farmhouse in Doylestown, Pennsylvania, about 39 miles outside Philadelphia, which he shared with Schamberg until the latter's death. He was so fond of the home's 19th century stove that he called it his "companion" and made it a subject of his photographs. The farmhouse itself serves a prominent role in many of his photographs, which include shots of the bedroom, kitchen, and stairway. At one point he was quoted as calling it his "cloister."

Sheeler painted using a technique that complemented his photography. He was a self-proclaimed Precisionist, a term that emphasized the linear precision he employed in his depictions. As in his photographic works, his subjects were generally material things such as machinery and structures. He was hired by the Ford Motor Co. to photograph and make paintings of their factories.

In 1940, Fortune Magazine published a series of six paintings commissioned of Sheeler. To prepare for the series, Sheeler spent a year traveling and taking photographs. Fortune editors aimed to “reflect life through forms … [that] trace the firm pattern of the human mind,” and Sheeler chose six subjects to fulfill this theme: a water wheel (Primitive Power), a steam turbine (Steam Turbine), the railroad (Rolling Power), a hydroelectric turbine (Suspended Power), an airplane (Yankee Clipper) and a dam (Conversation: Sky and Earth) .